Here it is. My first post since England and Wales carelessly waltzed Scotland and Northern Ireland out of the European Union. I still cannot gather my thoughts to blog about it. Maybe tomorrow. There is still so much going on.

This has been such a difficult fortnight. I'd been so agitated about the upcoming referendum results not to mention the appalling horror movie that was the endless commentary. I was fearful that the result would not be the one I wanted and even fell out with Clint because he was voting to leave.

Then, a week before the referendum Bert bashed his ribs in an accident involving a cow. He was helping Clint dose cattle and standing on a five bar gate when the big beast banged into it, causing him to lose his balance and fall on to the gate on his left side. When it happened he was winded, could hardly breathe and was very shocked. Bert never, ever expects bad things to happen to him, unlike his wife who envisages her immediate death every time she descends the stairs.

Clint was his usual unsympathetic self and carried on dosing the beasts. What else would you expect of a stoic?

Poor Bert. He was in so much pain and discomfort but all his friends rallied round and soon the painkillers were rolling in for it is a tradition among country folk to use up all the old medications before new ones are sought. He was even given Tramadol that had been subscribed for a dog but, I’m glad to say, he did not try it.

He seems to be recovering but it is such a slow process. When all his decent pain relief ran low he went to see his GP and she pronounced the ribs badly bruised. One of our friends is in the farm supplies and animal feeds business and he told Bert that there is hardly a week goes by that he does find one or two of his customers nursing bashed ribs because of rampaging beasts. See Bert! Now you know why I am timorous around cattle. You can never mock me again. 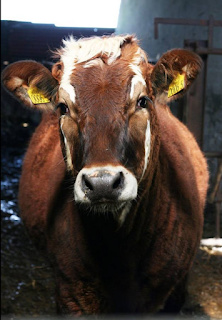 The Cowman suffered bruised, cracked ribs a time or two. Doc said it was often worse than having them broken. Hope Bert heals up soon!

wish him well from London Sister

Traybake's brother had his nose broken by a cow last week. TB is convinced the cows of NI are possessed by devils.

Bert is still suffering the effects and has sone days better than others. I have passed on all good wishes.