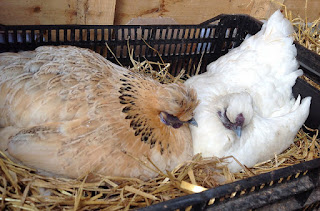 That was an expression I often heard my mother and aunts use when they were nervous or apprehensive about something. Well. I'm on eggs and I'm on eggs because Honey the bantam is on eggs. There were six, now only five and they are due (I think) to hatch this weekend. One broke on Friday, inside one rotten little embryo roughly 10-12 days developed. That is when I went on eggs. There was also a thunderstorm and Bert, teller of old wive's tales, informed me that electrical storms play havoc with developing eggs.

But it worried me enough to go on the internet and there I found that half the folk there believed it to be nonsense and the other half said it was true. I was unnerved. And when the little rotten egg was found next day I started to fret that poor Honey was wasting her time and energy sitting on a clutch of dead chicks.

I've been in and out of the hen house a dozen times today. Bert said I might hear tapping or cheeping but the country is so noisy you could hardly hear a thing. The songbirds are the noisiest, then the traffic on the road. At one point I thought I heard tapping but I might have been imagining it. I'd like to move her to the other house where she can have peace and quiet but I'm worried it would put her off. She is very easily put out, unlike Flour who is already in the spare house sitting on three eggs. I'll be up tomorrow at daybreak to see if anything has happened. So, on eggs, Honey, Flour and Nelly.
Posted by Nelly at 9:44 pm

Could you put a stethoscope to the eggs?
Good luck with your eggs, and now you have me on eggs, about your and the girls eggs.

Was just out. Nothing yet. Still on eggs.