When all around the world goes sad, mad and bad, it is the simple pleasures that count - one's chickens, the new calf that was born today - Martha says her name is Ava and we must never sell her. I say that we must but she shall have first refusal. Our other pleasures include friends, family and music.

And, of course, there is food. This weekend was not one of my better ones when it came to home-cooked food. Supper was shop-bought sausage rolls, tinned beans and an interesting salad made from tender leaves of kale (home-grown), olives, tomatoes and little sweet peppers. The dressing came out of a jar. I made (at Evie's request) the steamed chocolate pudding, chocolate sauce and ice cream dessert.  It was the wrong ice cream. Not popping candy ice cream. I made the excuse that I'd forgotten to bring my glasses which was a lie. It didn't matter anyway as Evie had been to a birthday party and was full to the neck of sweets and cake. She didn't even have dessert, said she was 'tired of it.'

Breakfast was Kellogs Variety Pack and Peppa Pig on Netflix. I wasn't part of it as I was reading The Guardian in bed. Some lad from Buckna was supervising the young'uns, helping them eat Variety and watching Peppa Pig. Lunch was (hang my head in shame) shop-bought pizza. I attempted to jazz it up with extra toppings and Lidls mozzarella cheese. But then, my triumph, the food that made up for all other culinary shortcuts and shortcomings, my first successful sourdough loaf. For, even though the first attempt resulted in rolls that could have served as missiles, I kept the mother going and made this... 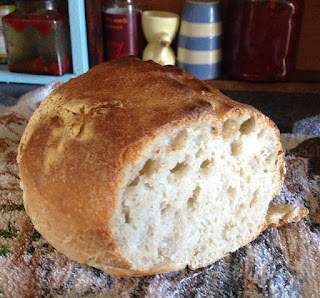 I know it is boastful but that loaf was not my only success this weekend. At Martha and Evie's storytime I selected a book of fables, beautifully illustrated by Janusz Grabianski. But one forgets how shite fables are. There is no real story, no satisfying ending, no resolution. The one I chose was about a fox who fell down a well and couldn't get out. Said fox tricks a decent old billy goat to jump into the well and help it escape. Then, the fox being wily and all, fucked right off mocking the billy goat for his gullibility. And that was the end. So I said to the girls,

I didn't think much of that story! I think I could make a better job of it!


So, putting down the book, beautiful illustrations and all, I finished the story bringing in two brave young animal rescuers called Martha and Evie, a grandfather (Bert) with a length of baler twine in his pocket, a lovely woman called Denise who was in need of a billy goat, then a billy goat in a new home in The Parks with two wives and four lovely kids (three girls and a boy) and a nasty fox who called round and ended up getting butted over a hedge never to be seen again while everyone got to live happily ever after. I believe I enjoyed telling it far more than the girls enjoyed listening to it. My reward came this morning when Evie joined me in bed and said,

That was a good story last night.


Thanks, Margaret Green (and Aesop) for the beginnings of the tale and thanks to Janusz Grabianski for the wonderful pictures. 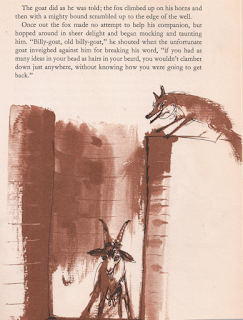 The bread is wonderful, but the story with it's new ending was masterful.

Thanks Mage. Appreciated that. Baking bread again tomorrow and looking forward to finishing another one of those truncated tales next time I have the girls. Hope you are continuing to heal.