There is always too much news. Sometimes it comes from a distance and sometimes it is closer to home. Yesterday there was the news of the carnage at Westminster, too soon to say much about, just the hard facts, four people dead and many more injured. Anyone who has ever been to London will have walked or driven over Westminster Bridge. Indeed, my sister, until recently, walked over it regularly as part of her commute to work. Like all do, in this time of almost instant communication, I established that both London sisters were safe. And watched as the television news went round in circles showing the same sad and terrible footage over and over again.

And today's big news in Northern Ireland will be the funeral of Martin McGuinness, former Deputy First Minister at Stormont. Opinion on his legacy is, as might be expected, divided. We are a divided people here in these six counties but I'm happy to declare that I am on the side of those that respected him. I came late to that stance but then, we're all on a journey, are we not?

In Drumrankin, our wee bit of it anyway, the news is homelier. The chickens are free again and we are observing all the orders guidelines laid out by the government to protect them from avian flu. My main contribution will be to never set foot in a commercial chicken farming establishment. Should be easy enough to keep to. 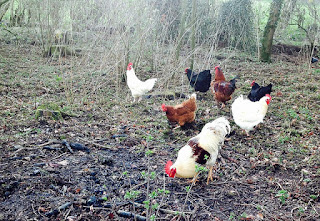 Keep safe everyone, no matter where you are and don't believe everything you hear, even if you hear it from me.
Posted by Nelly at 10:55 am

Yes, I have been over that bridge, but could only watch the horror a few times around. Lovely about the chickens tho. :)

Yes, that was a horrible one. The chickens had a wonderful day, today. It has been sunny and warm and all the critters have had a good time. We have to think about the good things for balance. Hope your recovery is coming along.