I knew this woman once who worked in a woman’s hostel. Occasionally asylum seekers, those with children, came to stay in the hostel. There was one young woman in particular that she always remembered. This young woman was a Romanian gipsy and she had a son around one year old. Her name was Andronica.

The other women in the hostel did not take to Andronica at all. They picked on her, they complained against her, they said she was cruel to her little boy. The woman I knew never saw any evidence of this so-called cruelty but, nevertheless, it was reported to Andronica’s social worker and staff were asked to monitor the situation.

Andronica had barely a word of English and this too made life very difficult for her. The woman I knew tried to communicate with her, even bought a Romanian phrasebook but it was hard going. The social worker told the hostel staff that Andronica had extended family in Dublin and that coming to Belfast had been a big mistake on her part.

Weeks passed. Andronica phoned her family in Dublin almost every night. The telephone was just outside the office door and the woman I knew could overhear her desperate phone calls.

One afternoon Andronica’s social worker called. The news was not good. Andronica’s case had been decided and she was to be deported back to Romania in a matter of days. Andronica was not to be informed in case she scarpered. The woman I knew felt really bad about this. Andronica had got herself and her son to Ireland to join her family but because she had flown to Northern Ireland instead of Dublin she was unable to get to them. Later that evening she called her family. The woman came out of the office and asked Andronica if she could speak to the person on the line. She was handed the phone. The woman asked who she was speaking to and was told that it was Andronica’s brother. She told him that his sister and nephew were to be deported. She told him that they should make arrangements to meet her in Dundalk. Then she handed the phone back to Andronica.

When Andronica hung up the woman I knew invited her into the office. She showed Andronica a map of Ireland and indicated where she was staying now and pointed to where she needed to go. To Dundalk. A border town. Halfway to Dublin.

The woman I knew went off duty the next day and was away for several days. On her return to work she was informed that Andronica and her son had left the hostel without informing staff or social services. Some of her fellow residents were able to let staff know that she had called a taxi which had taken her and her little boy to Dundalk. 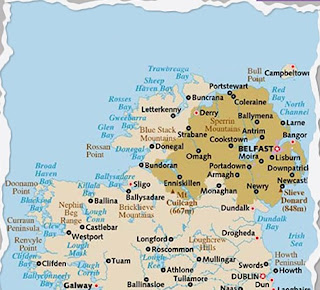 Well done to that woman.

If I ever met that woman, I would thank her for her compassion

What a decent woman