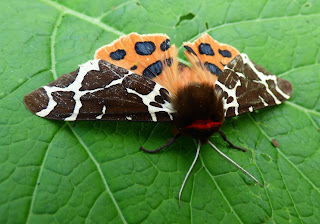 On Monday afternoon I tripped and fell. There were a lot of people around but it was Hannah who came to my aid. There was a bamboo cane lying on a garden path and the tip of it caught in my Birkenstock causing me to completely lose my balance and down I went on the rough flagged path. I used my hands to save myself and it was the hands that bore the brunt. An abrasion on the left wrist, another on the right and worst of all a badly torn thumbnail. I was very lucky. But the nail. Afterwards, I thought, if ever I was really injured, in A&E say, with fractures, internal injuries and a torn nail, it would be the nail that would annoy me most. 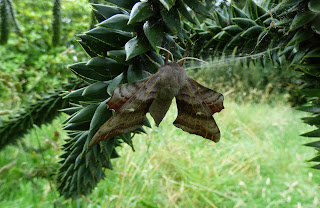 Bert spotted me on my hands and knees, among the sidalcea and the geraniums with Hannah attending me and do you know what he thought? He thought I was looking at a moth! 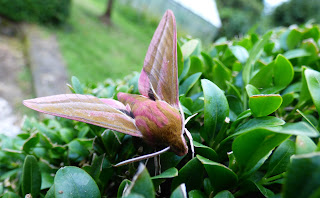 It's true that since Rachael loaned us her moth trap I have been a bit obsessed with lepidopterology, so much so that I arranged a special sleepover for Martha and Evie so they could share the excitement. That was last night. This morning we all gathered round to examine the night's catch. 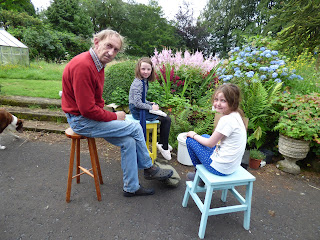 Martha's specimen box proved to be a great boon for looking at and photographing the elephant hawk moth... 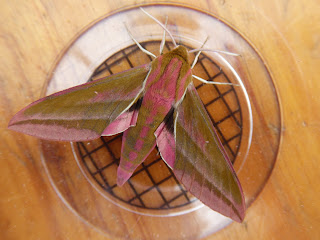 ...which, like all the other specimens briefly captured, was returned to the wild and will be flying again tonight.
Posted by Nelly at 11:19 pm

I hope you keep well Mary. Nothing worse than going down when least expected 😲 these are really nice moths. Mother Nature at her very best 💖

If you fall again, try to roll not land on your hands. I put my hands out in front of me last time I fell, and I tore both shoulders. Those are simply wonderful moths. I've never seen anything like them.

Thanks Mage, I will try to do that. funny enough, the girls other granny said my shoulders will feel it in a day or two.

You were lucky - I am nursing a broken wrist which has had a metal plate inserted after being knocked over on the beach by new puppy overexcited by his first encounter with the sea. I like the tip about rolling rather than using your hands.

I probably didn't roll because of crushing the geraniums. Next time I won't care. Those geraniums are getting pulverized!