I would love a day out in Belfast. I'd get off the train at Botanic and head towards the Ulster Museum where I'd spend an hour or so. Then I'd visit the Palm House and the Tropical Ravine where I'd take lots of photographs. After that (lunch would be fitted in somewhere) I'd stroll down towards the station calling into all the charity shops, vintage stores and second-hand bookshops where I'd buy at least three books. Not too many as books are heavy and there would be one in my bag already that I'd read on the train journey. And on the way home I'd probably be the only person in the carriage reading as everyone else, even my fellow oldsters, will be stuck in laptops and smartphones. When I was at university some years ago, long before the ubiquity of mobile devices, every solitary traveller would be reading, even if it was only a magazine. I used to try and catch glimpses of other people's books and judge them. Of course I did.

The majority of the books on my shelves are second hand, some were even bought in the old Smithfield Market more than half a century ago. That is where I sourced most of my Steinbeck novels. Many of those paperbacks were ancient when I bought them and are crumbling to dust now. I cannot bear to part with them unless I can replace them with another copy in better condition. A few I bought new in Palmer's Newsagents in Antrim. I also bought a few books of poetry there from The Penguin Modern Poetry range. All those poets are dead of old age* now but they were pretty modern then. Can you imagine being able to go into an ordinary newsagent nowadays to buy American classic literature and volumes of poetry?

Since lockdown, I've been buying my second-hand books online and it's like this. Ganching or Mikey or somebody else will blog or tweet about a book and I'll think to myself, Barbara Pym? I've never read her. And minutes later I've ordered a Pym from eBay. 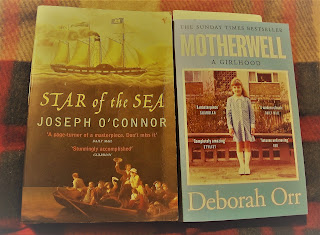 There was a copy of Star of the Sea on the shelves for years which I'd never got round to reading. Then I heard an excerpt from it on Radio 4 Book of the Week. I decided I needed to read it but it had disappeared. I must have given it away. On to eBay and bought it again. Bert read it before I got round to it and we both enjoyed it. He'd already tackled Redemption Falls but said Star of the Sea was far better.

Motherwell replaced the O'Connor in the reading basket. I'm already well into it will probably finish it by the end of the week. 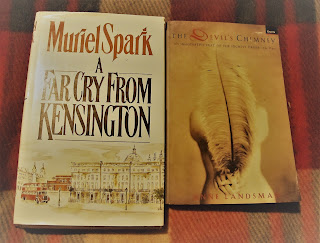 I'm only a few pages into The Devil's Chimney which Bert has just finished. He liked it but said he is not sure what was going on. Hopefully, I'll be able to explain it to him when I'm done with it. The Devil's Chimney was a Botanic Avenue buy. The Muriel Spark came from god-knows-where. I'd not read Spark since my early twenties and only remember The Prime of Miss Jean Brodie and The Girls of Slender Means (which I must re-read). There was something about a shared Schiaparelli dress that was (I think) emerald green.  Perhaps it wasn't. Anyway - A Far Cry From Kensington was very enjoyable and I'm off now to my favourite bookseller on eBay for another Spark.

*Lawrence Ferlinghetti died only as recently as January 2021.

Yes, when I go to LA, everyone is on their electronic devise but moi.

We are the wise ones.