On Tuesday morning Bert asked me if I'd like to go with him on a plant delivery to Broughshane. I thought about it for a moment or two then said I would. The chance of an outing is rare enough these days. For those who aren't familiar with this corner of North Antrim, Broughshane is a village famous for its floral displays. I was told by a former resident that those who don't keep their garden nice are not well-accepted in the community. Which may, or may not be true.

Bert was bringing James McNeill a good selection of climbers, camellias, an acer and a magnolia stellata in bloom. I remarked to him as we were bringing them in that they'd not sit long. While we were in there I spotted some gorgeous lithodora 'Heavenly Blue' and thought I'd quite like three of them for planting in a big pot. Yet for some reason, didn't buy them.

That afternoon we got a call from Broughshane. Plants all sold can we have the same again? So next day we were back and I was intent on my lithodora. I was disappointed to see the plant stands almost empty and no Heavenly Blue. I enquired and was told another delivery was due.

Next day was Thursday and we were having Martha and Evie all day. I picked them up in the morning and drove straight to Broughshane. Still no lithodora. We bought lots of sweets, the ingredients for an Ulster Fry and a new kettle. I reserved three lithodora 'Heavenly Blues'. When we got home Bert said McNeills were calling. They needed another delivery.

So, on Friday I made the fourth trip of the week to Broughshane. No lithodoras. As we were leaving I was accosted by a woman wanting all the gen on the magnolia. I told her as much as I knew. I believe she thought I worked there and I was beginning to feel that way myself. On the way home I decided that if I'd missed out on the lithodora I was going to have Bert's last magnolia stellata. And so it was. 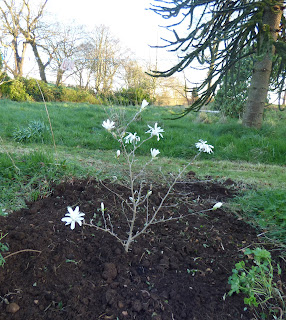 All my own work. I did all the weeding, digging over and planting myself and went to bed last night tired and happy. 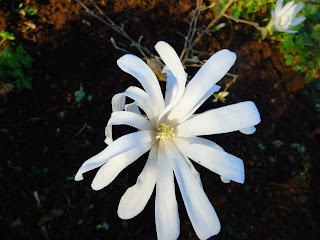 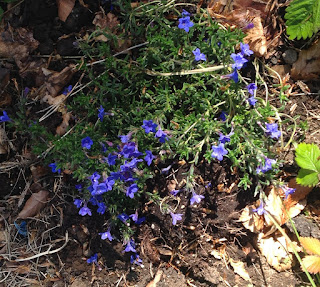 I still haven't given up on the lithodora. This is one I had a few years back. It didn't survive.
Posted by Nelly at 9:14 pm

There are a lot of those Stella magnolias in gardens around here and we have decided to get one for our shared front garden.

Ganching, it was your pictures that made me want one.