Mussenden Temple and Some Other Places 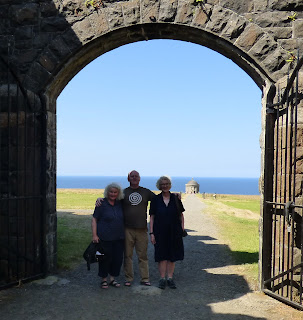 Our youngest brother Joe invited Ganching and me on a Mystery Tour. This was always a great ruse on our father's part from when we were small. He'd take a carload of us on a Mystery Tour and, for some reason, this was so exciting to me. We weren't going to the Glens, or the seaside, or to Tardree. We were going somewhere different, somewhere mysterious. Looking back, I think he might just have wanted to incorporate getting us from under our mother's feet with some jaunt to a building project he was interested in or a drive-by some farm of land an acquaintance had acquired. Hopefully, it wouldn't be a sail up some long lane so he 'could have a word with a boy', as it was never a word, it was many, many words and we were never allowed out of the car and there was always at least one collie dog in the yard and maybe some children peeking at us that we never ever got to play with.

At the end of it all, there would often be sweets so that made everything worthwhile.

Joe's Mystery Tour took us to the next county, to Downhill, to the mountain above it and back down to the Downhill Demesne and the Mussenden Temple. Such a while since I'd been there. Last time my hair was brown and Danny was in his prime and he's been dead now for seventeen years. 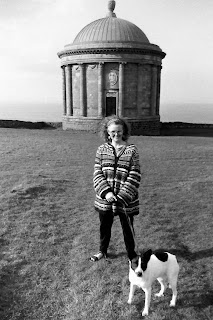 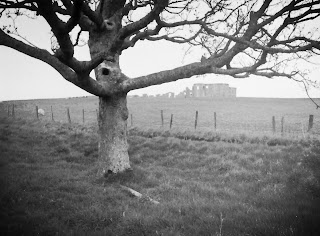 This picture was taken at the same time. The National Trust has made many changes to the site with smart fencing, car parking, gravel paths and meadows but the old tree still remains. 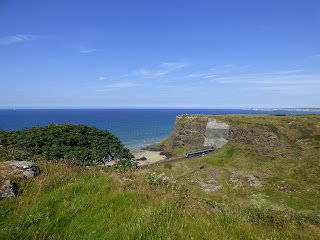 The Derry Train
The coastal railway route from Coleraine to Derry is spectacular and has been rightly extolled by train enthusiasts such as Michael Portillo and Michael Palin who described it as "one of the most beautiful rail journeys in the world". Seeing that train made me wonder why I wasn't dusting off the railcard and taking a wee trip to the Maiden City someday very soon. 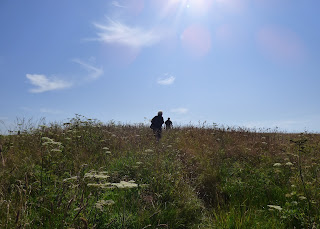 One thing that delighted me about the Downhill Demesne was the meadow planting. It is so much more beautiful than mown grass.  On the way back we passed swathes of yellow rattle gone to seed. I was tempted to harvest a pocketful but did not. It will do far better where it is.
To end (for now) a fantastic day out in the best company, with people I've known and loved for half a century and more. I know I promised Other Places in the title but that will do for another post.
Posted by Nelly at 11:14 pm

that is so beautiful - the memories, the landscape and the company

Lovely picture of the three of you.

Amanda, Eleanor - It is two years since I have been in company with my sister. It was lovely to have this short time with her and we made the most of it. The weather was glorious and the places I am privileged to have on my doorstep are wonderful too.

Thank you for sharing these perfect moments.