I had my long-awaited knee X-ray yesterday. The appointment was at 2pm and, as I always like to be early, I presented myself at five minutes before the hour and was seen immediately and back in the van ten minutes later. The downside of these speedy appointments is that we wait much longer to get them and longer again for the results.

Yesterday's other noteworthy event was my first sighting of the Jupiter-Mercury Christmas conjunction. The big night was last Monday but it was too cloudy to see anything. The two planets are drawing apart but we were able to see it in our own yard and I was glad that I had the opportunity. We earth-dwellers do set a lot of store by these heavenly events even though the planets are always there and the conjunction is simply an optical illusion. Still, it was magical.

Thinking of it I was reminded of my obsession with the Hale-Bopp comet in the late 1990s. Bert’s father Johnny was fascinated with it too and probably first saw it from this yard in 1996. By the time the comet was at its most spectacular Johnny was dying. Earth’s view of Hale-Bopp peaked in April 1997, Johnny died less than two months later. When I think of Hale-Bopp now I feel sorry that he didn't get to see it in its full splendour. The point of my story - take every opportunity to gaze at the heavens. 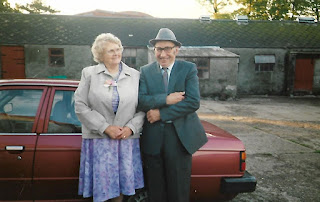 So today, it’s Christmas Eve again and this is my sixty-eighth Christmas. As always, things to do. I’ve wrapped all the presents available to me for half of my order from Berlin has yet to arrive. I spent most of the morning making stuffing for our one-legged turkey. Then at half-ten stopped everything to listen to Miss Evie and a multitude of musicians aged from four to eighty take part in a Christmas recording of Have Yourself A Merry Little Christmas organised by the BenedettiFoundation. 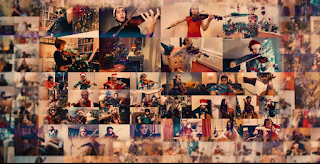 Evie is one of the cellists (white jumper) roughly in the middle of the screenshot. Only a close relative would bother to seek her out as the picture is so teeny, but she was there, she took part and I am very proud of her.

Tomorrow will be a quiet Christmas, just Bert, Hannah and myself and Bert will be spending a good part of the day with his elderly aunt in Kells. I expect I’ll have a few hours on my own. It will be different and I’m even looking forward to it a little bit. Especially the family Zoom call at 9pm. My one-legged turkey should be starting to sizzle nicely by then.

I know you meant 9am x

Have a good visit withh everyone. Merry Christmas to you, Bert, and Hannah.

Thank you Mage, I wish the same for you and George.

Merry Christmas to you. I glad to come here and read this post.
stratford poland house