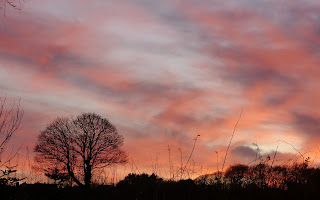 I didn't make such a great fist of Christmas this year, no Christmas cake, no tree, no fairy lights, no three desserts. No shops.

The no shops shopping was the good part. I did Christmas present shopping online and it was OK except for around five of my gifts not arriving on time. And that was despite being ordered weeks in advance. It's a hard thing to admit but Amazon, no matter how wrong the company seems, is at least reliable. Note to self - more forward planning for 2021. 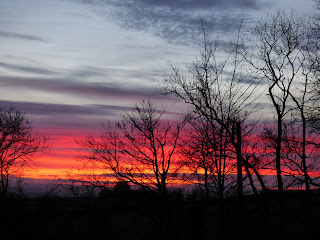 When it came down to it I missed not having a tree.

Bert volunteered to be with his elderly Aunt on Christmas Day so I spent a good part of that day on my own. There was a family Zoom call planned for the morning which featured Martha and Evie, James and Emily showing us all their presents. I missed half of it due to connection problems and lack of forward planning and had a jolly good cry about it. Then of course, I had to cry about how sad Christmas is when we think of all the people (and dogs) that aren't with us any more then had to give myself a shake remembering that I have family members missing a child who, had she lived, would still be young enough to believe in Father Christmas.

Boxing Day was better. Lockdown began but we did have Martha and Evie and their parents around. More Christmas food and then a round of Blind Man's Buff, Chinese Whispers and Charades. Is it just me, or are  Blind Man's Buff and Chinese Whispers maybe not terribly PC? If not, I've yet to receive the memo and anyway now that we are (apparently) no longer sophisticated Europeans these things don't matter. Who knows. Anyway - it was great fun and we laughed a lot which was heartening.

Bert spent today with Aunt Lizzie, I footered about doing little bits and pieces which included graping silage to cattle, a first for me. It is great to still be having new experiences in one's late sixties. I also watched the first episode of Bridgerton and cracked open a bottle of Malbec while it was still light outside.

I'm someone who has lived a life seemingly in the background, I must say this final indignity I have suffered almost too much to endure. You see, I have been sickly and weak since the day I was born and doomed to go through all my life a weakling. I seemed to have always suffered from one illness or another and could never play with the other children as I so desperately wanted to. Mother always made such a big fuss over me, also, making the situation worse as the other boys teased me mercilessly after they saw it. I was browsing  the internet searching on how i could be transformed into a powerful when i came across the email of a man named Lord Mark. who was a VAMPIRE so I told him that I has always dreamed of becoming a  VAMPIRES, All i did was just to follow the procedure that i was been told, and i bet you that procedure I took change my entire life to something i ever desire, freedom, sickness free, pains free, fame, influence, connections and even more that i can. Thanks to Lord Mark. Do you want a life full of interesting things? Do you want to have power and influence over others? To be charming and desirable? To have wealth, health, and longevity? contact the vampires creed today via email: Vampirelord7878@gmail.com