One of the more interesting things about social media is how it gives one an insight into how other people are coping in the run-up to Christmas. There are pictures of decorated trees on Instagram, family WhatsApp photos of adorable five-year-olds in nativity plays, videos of folk in their reindeer antlers and hideous Christmas jumpers and exciting blogs about London flat dwellers having been delivered fourteen-foot trees when they'd only ordered a four foot bush.

This year is a Christmas like no other with most of the world coping with a pandemic and some of our governments coping rather badly. And here, in the British Isles everyone intelligent one of us, no matter what size our island, has the added concern of what is going to happen after Brexit.

Still. Christmas. I'd promised myself that this year I would not add to my anxieties by leaving everything to the last minute and that I would shop online. It was all going rather well. Except for one order, something Christmassy ordered from a company advertising on Facebook. There was nothing to indicate that the items were coming from Berlin and it was two weeks before I heard a peep. A few more anxious days followed then joy, I got a notification that my parcel had arrived at Princess Royal DC. I had no idea what or where Princess Royal DC was but I suspected it might be a boat. Turns out it is a distribution centre in London. Six days later my parcel is still there and it contains items meant for nine different family members. 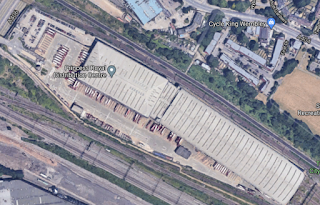 This place is massive. It is also 17 mins by postman's van from London Sister and just under an hour from Ganching.

Now Bert has taken to watching the news and bounces in to tell me snippets he thinks might be of interest, like,

Stanley McConaghy* was on the news again, tonight!

Looks like BT42 (our postcode) is the most coviddy** hole in Northern Ireland!

You're never going to get that parcel before Christmas. Just seen a report of the distribution centres in London. Mountains of parcels. They can't cope.