Every Picture Tells A Story 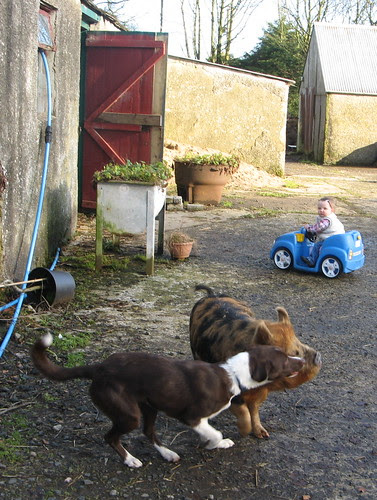 One day when Judy was a very small pup and Lily and Rusty were quite a bit smaller than they are now, she tripped up to them all trusting and puppish and Rusty nipped her and tossed her in the air. I happened to catch it in a little movie but never showed it as it was sort of harrowing.

There was no real physical damage done to the dog but ever since she has HATED pigs. They don't hate her. They treat her as if she is a particularly annoying buzzing fly. As you would too if you were built like a mini Sherman tank made out of bacon.

I wonder what Miss Martha makes of it all?

That young lady will go places!

I have a feeling that Ms. Martha will acquire your talents, Nelly. That's to say an finely tuned eye, ear and voice for life.

Times I look "into" your pictures or really "hear" what you say and say to myself:"Wish I could walk over there and spend an hour with them."

It's a great gift.Thank you.

Thank you both! I'm sure Miss Martha will go places, with or without her blue car.

Such a lovely thought Anne. I will try to appreciate more what I have.