I completed my last day of paid employment a fortnight ago. The idea was that I'd be getting straight stuck into a stint of looking after Matty. But the way it turned out was Matty got offered two weeks respite in the Braid Valley Hospital, so I've been on holiday for the past two weeks and it has been rather wonderful.
I hit the ground running in the first week. Bert's affairs needed a great deal of sorting out. I spent that week ordering clematis liners and sorting out his paperwork. I also got working on another plan. This year we intend to make more use of the land and, to that end, have taken on board another couple of people to work on our co-operative allotments. Our aim is as much self-sufficiency as we can achieve.
But before that there was some overdue cleaning to be tackled.

I started to clean underneath the furniture instead of flaffing around it and I was just in time. The pup-chewed wood, the milk bottle cap and the shred of Christmas paper could have stayed under the sofa for ever but I reckon that dead mouse would have made its presence felt before long. The sun-room, with its wood-burning stove, can get rather warm. 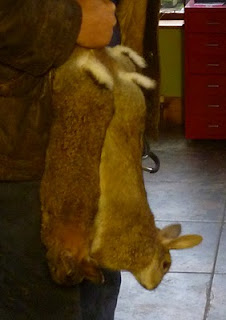 And talking of more useful dead animals - our friend Peter presented us with three fine, plump rabbits.
I had a great idea. Bert said it was his but as he didn't say it out loud that means it was mine. We were having the co-operative around for a brain-storming luncheon party last Sunday and I though it might be a useful and bonding experience if Bert took them for a master-class in bunny butchering.
So, after a delicious lunch of roast pork, home-grown vegetables and blackberry and apple crumble Bert took a party of three out to the back shed, showed them the bunnies and gave them a knife and went off to do something more interesting instead. Luckily Rachael had a book. 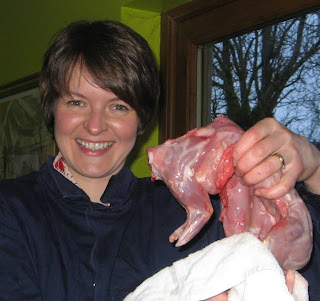 I still haven't heard what their rabbit pies and stews were like but I'm sure they were yummy. Freddie de Cat certainly enjoyed his bunny hind leg, made a nice change from mouse. I told Bert he should have hung those bunnies out of reach.
Young Rooney was most disappointed with us that we didn't keep the skins. Said they make a great rug when cured and stitched together. Rachael will need to be got on to that one. I fancy some rabbit skin slippers myself.
Posted by Nelly at 9:24 pm

Dave tells me he's for keeping the skin next time, apparently you can cure the skin with the rabbits brains. I have told him I will NOT be assisting.