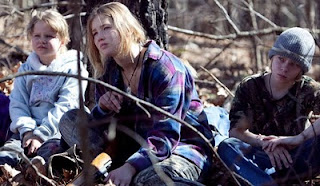 Bert and I watched this film together. He had already watched it on his own but chose to watch it for a second time with me. It was superb and I'd recommend it to anyone. It is not sunshiney but it is life-affirming. Jennifer Lawrence playing the young heroine is fabulous in the part and the child actors were astonishingly good.
There is one harrowing scene featuring the actress Dale Dickey playing Merab. Merab is one of three practical, hard-nosed sisters who don't fear violence, the dark or power tools. I'll not go into details but afterwards I said to Bert,

Can you imagine me, London Sister and Ganching at that carry-on?

Youse would be complete wimps. Youse would be, "Oh I'm scared!" or, "It's so dark!" or, "Is that a cow? It's looking at me!" Maybe Kerry or Leitrim Sisters could handle it but not you three!

Well. I don't know about Ganching and London Sister but I couldn't use a chainsaw in a canoe. I can't even swim!
Anyway - if you get a chance to catch the film watch it. It really is good. Look out for the Deadwood actors, especially Sol Starr (John Hawkes) playing Teardrop.
Posted by Nelly at 9:38 pm

Email ThisBlogThis!Share to TwitterShare to FacebookShare to Pinterest
Labels: films