There was a documentary on tonight about the murder of Shirley Finlay in Ballymena in 2006. It was strange and chilling to see the events re-enacted. I missed the first part of it so searched the web to find out when I could catch-up with it. Whilst I was looking I found this image on Google. 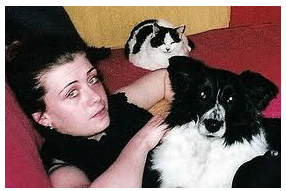 It's a scan taken from a photograph I gave to Shirley's foster mother - it's not the best quality. It appeared in a few newspapers at the time and is currently on a memorial site that Shirley's foster family set up. Somewhere I must have the original negative but God knows where.

The dog on Shirley's lap is Rosie. Shirley and she were very fond of each other. The cat is Caps. They are all gone now. Cat and dog lived to be seventeen and ten respectively. Shirley, had she not been murdered, would now only be thirty years old.
Posted by Nelly at 12:19 am

Did anyone catch her murderer?

Yes. He is serving 20 years. He was caught and charged really quickly.

I love this picture. Rosie liked sensitive people, she was a sensitive dog herself. And Caps is just a big pudding. They must have liked having Shirley around.