Beware of the Boar

Even though he is castrated Rusty has a set of tusks on him that are as sharp as knives. 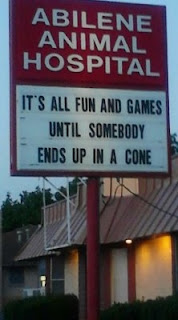 
Charlie the collie does not respect the pigs. He chases and harasses and slips in for a sneaky nip on a pig's ear, nose or bottom.  He does not listen to me and the only way to avoid it is to close him in when the pigs are being moved. Yesterday morning he got out and started his nippy behaviour. Rusty charged him, tossed him and walked over him. Charlie ran off - I didn't realise that he'd been injured.

A few hours later Ben noticed fresh blood on the kitchen floor. Charlie had just left his corner to challenge and bark at a couple of callers. The blood spots led back to his bed. I looked him over and discovered a deep gash on his hind leg. It was then that I knew that Rusty must have caught him with a tusk. 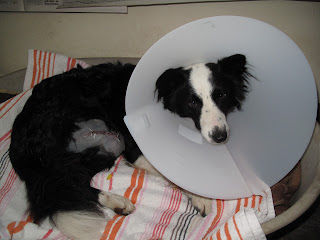 It was straight to the vet. She discovered a puncture wound as well as the gash. Poor dog got eleven stitches. You'd think it would have made him wary of the pigs. Not Charlie. He came out this evening when the kune kunes were being moved into their evening quarters and started to stalk them, cone and all. Thankfully he kept his distance. I am going to have to be very careful in future. The dog and the pig are now mortal enemies and the dog is insane.
Posted by Nelly at 10:36 pm