Matty would have been 88 years old today. I'd always thought she'd live to her nineties for there is a saying around here,

She had a great concern for her health and was always worrying about something. The odd thing was, when she did become seriously ill she barely complained at all.

It's a strange one today. I always think about Mum on her birthday but today I am also thinking about Pearlie who died eight days ago at the age of 88.

During the lead up to the funeral a great many things were, as we say in Ireland,

put on the long finger.

These included the vegetable garden, the bees and, of course the laundry. After the funeral I washed all of Pearlie's things with a view to recycling most of them and today was the first day in many years that I put on a wash that included nothing of hers. It was strange and, to be honest, a bit of a relief.

I mentioned that the bees and the garden were neglected. On the day of Pearlie's funeral there was a swarm of honey bees hanging from an apple tree. No one had time to deal with it and they flew away. During the wake the birds finished off the currants but that did not matter too much as I already had pounds and pounds stashed away in the freezer. The vegetables in the polytunnel were unharvested and it all turned into a jungle. I just about managed to keep on top of the watering which was just as well as we had a heatwave.

So here we are - remembering Matty which is poignant and sweet, and missing Pearlie Blue which is strange and new. 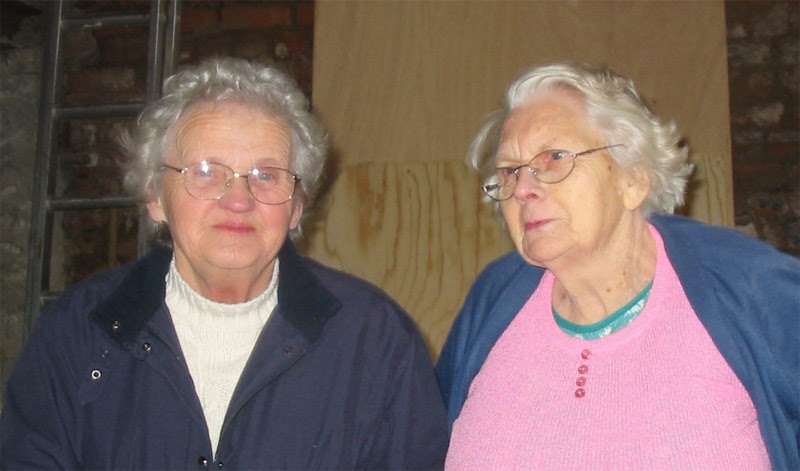 A photograph of Matty and Pearlie taken nine years ago when they were both fit and well.
Posted by Nelly at 10:30 pm

Peace be with you all. Hugs across the miles...

Thank you Brighid. Y'know Pearlie was such a big nuisance that I never expected to feel this loss so keenly but I do! Every morning I wake up and I miss her.

That is a lovely photo of the 'Old Girls' together. Stay strong, you are doing well. Were they your bees that swarmed or visitors for the wake?

I think those bees might have been visitors to the wake. There was also a young buzzard near us that day calling for food. As we walked up the road behind the coffin a group of cattle came to look over the gate. It was all very country as befitted Pearlie well.

What a lovely way of looking at that day and those wonderful women.

I seen a play the other night set in Sligo - The man in the women's shoes - apparently if you keep bees you should inform them that there has been a death.

Bert did do that on the morning of Pearlie's death. Two weeks today. It seems like months.