Independent To The Last 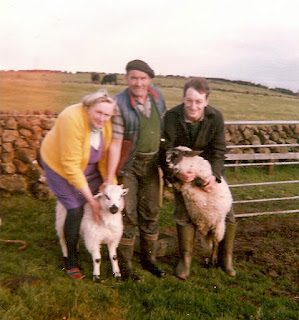 Nessie (Pearlie's late sister), Paddy and a young neighbour. Picture probably from late 70s-early 80s.
It was back in  February 2012 that we first heard that Bert's Uncle Paddy had died. It turned out that reports of his death were greatly exaggerated and he managed to live fairly independently for a few more years. Then he took what folk around here call 'a turn' and ended up in hospital. He was there for more than a month and it was becoming obvious to everyone around him that independent living was no longer possible. His home, a converted chicken shed, had few amenities which meant that home support wasn't an option. Carers tend to look for running water, electricity and flushing toilets. Paddy had none of these luxuries. So he went to a nursing home and, by all accounts, it was a nice enough place.

His turn had left him confused. At first he talked a lot about going home. When his friend Julie visited him he always expected her to take him back to his own place. But it was not to be. He told Bert that the 'hospital' was a nice enough place and that they were good to him there but he'd rather go home. As the months passed he settled down but there was a reason for this. Once when Bert was visiting Paddy put this question to him.

D'ye know who owns this hospital?

I don't know that.

I do. I bought it from Samuel Carruthers. He was going to France and needed the money.

Aye. I gave him three thousand pounds for it.

And Paddy was content enough to stay in the nursing home knowing that it was his own place. Julie phoned last night to let Bert know he'd taken another turn and was back in the hospital. She phoned again this morning to tell us that he had died.

Bert saw Paddy two weeks ago, said he looked very well and seemed straight enough in his mind. He was talking about his dogs and seemed pleased that Roy was well settled with us. There was no talk of wanting home. He told Bert again that it was his hospital. Bought and paid for. Three thousand pounds.
Posted by Nelly at 7:51 pm

I'm so sorry for your loss.

Thanks Claire. I'll pass that on to Bert. To be honest I hardly knew Paddy. I only met him a few times. But I heard so much about him from Bert that I feel as if I knew him well.