Today, Bert and I went to Lough Patrick, near Draperstown in County Derry. We only heard about it last week from our friend Howard. He told us that it was a place of pilgrimage with wooden crosses dotted round its rim. I realised that it must be a place where Catholics performed the stations. Howard being C of E knew nothing of stations. He enthused about the stillness and peace of the lough and, like a true traditional pilgrim, he'd gone barefoot.

The lough sits in a bowl shaped hollow with the surrounding landscape out of view. There is a feeling of isolation, even eeriness. It is easy to see why it has been a holy place since pagan times. The lough's water was reputed to have healing properties and it was said that no one could ever drown there. When Christianity came here these wild places were absorbed and the Church added its own stories and rituals. In Ireland holy places abound and some of the old pagan superstitions associated with them continue to this day.

Centuries ago pilgrims came to Lough Patrick from all around and even from as far away as Scotland and England. Eventually the church started to frown upon it. I suspect that some sort of a Fair Day atmosphere might have prevailed with improper behaviour such as the taking of strong drink and, among the younger folk, dancing and kissing. 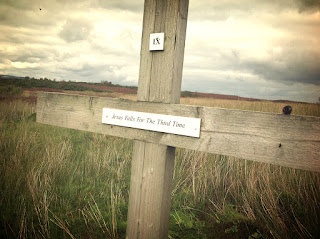 At the very start we took a wrong turn and found ourselves at the ninth station.


If it hadn't been for the wind turbine sited unfortunately close to the lough it would have been easy to imagine those days, long ago, when people travelled from afar to do the stations at Lough Patrick. There was a great deal of protesting about the turbine from both an environmental and a heritage viewpoint. At around the same time there were plans put forward to build a turbine near Slemish mountain, another site associated with Saint Patrick, but in that case it was found that breeding pairs of the protected curlew bird inhabited the area. No curlews at Lough Patrick so up went the turbine.

I didn't do the stations as it was hard enough just to make my way over the scrags of heather and the boggy patches. It really is a very boggy place. Bert's hiking boots kept the water out but my trainers were quickly soaked through and, like the pilgrims of long ago, I found it far better to go barefoot. And I kept stopping to take photographs. Bert, as always, strode far ahead of me. When I joined up with him he asked if I'd prayed or done anything 'paganish'. I replied that I had not as I'd spent most of my time cursing and swearing as I tripped on heather roots or went up to my knees in a patch of bog. All being well the immersion will have cured my stiff knees. I'm hopeful.

On the way back we spotted in the distance a lanky man with two sprollies approaching. It was Howard, back for another visit to this magical place. And Bert plans to go back tomorrow. For he lost his phone, probably when he tripped on a heather root. 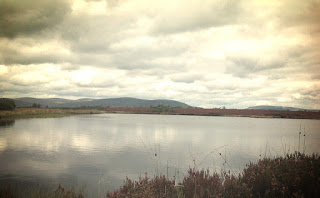 What an interesting trek, and I learned a bit of history.

So did I. Thanks Brighid.

Thank you Linda. My pleasure.