So, just as the oul' sore shoulder starts to ease I get a tension backache that starts every evening after supper but I will not complain as my sister is laid up with a very sore face after taking a nasty fall at the weekend. I was on the phone today speaking with her when Martha came in and I knew by the child's face that she wanted to tell me a big story so stalled her by telling her that I was talking to Aunt Gan who wasn't feeling very well and, bless Martha, she sat patiently and waited, even had a little chat to Gan herself.

As soon as our call had ended Martha announced,

Aunt Gan's not the only one of the family who's had an accident. Bert has cut himself on barbed wire and he won't come in from the fields to get it washed so I'll have to bring him a plaster.


I said we were out of plasters so she'd have to bring him a bandage and I put together an emergency pack of bandages, tape, scissors and wipes.

Off she ran, heading for the field where Bert was fencing.

Don't run. You must never run with scissors. Hasn't there been enough accidents in this family?


About half an hour later Bert and the girls returned. His wrist and hand were heavily bandaged. He told me later that she'd ordered him out of the muck hole he was standing in as it was far too dirty a place for him to have his wrist cleaned and dressed. Not bad going for a seven-year-old. 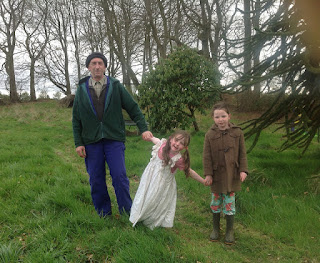 Hope Bert has made a full recovery. I am a quite a lot better now.

Ah she's good Mage. We went to the pharmacy yesterday and bought new dressings and she bandaged him up again. Made a great job of it.