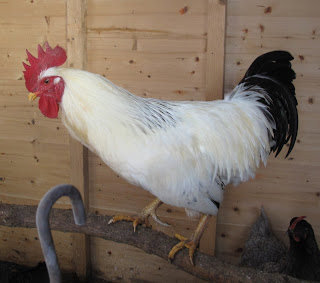 When a rooster flies at you and puts his spurs into your leg, you notice it. This fellow was a big heavy lad and he ruled the roost. I'm going to miss hearing him crow tomorrow morning. Blogged on 02/06/2015

This is Duke, our senior rooster. He was reared as a battery hen and turned out to be a male so, as our previous rooster had been taken by the fox (see above), we gave him a home. 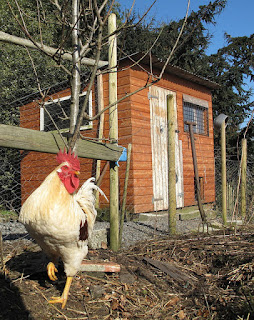 He was a timorous fellow to start with but, as his confidence has grown, he has turned out to be one of the most vicious roosters we've ever had. I have to keep a tight eye on him when I go into the run. Tonight I forgot. The seven youngest chickens take ages to go into the house at bedtime and I was giving them a bit of encouragement or, to be honest, chasing them, when he came flying out of the house and launched himself at my right leg, at knee height.  I limped into the house to clean the wounds, both bleeding, where his spurs had punched right through my heavy jeans. My knee had already started to swell. Of course, I was raging and considered having Bert kill him, or leave him out in the woods for Foxy to find. It's not as if he hasn't three fine sons to take up rooster duty in the hen run. But,  then I relented for he was only doing his job, protecting his flock.

Hopefully, my knee will feel better tomorrow and I won't lose the leg owing to some filthy chicken disease. Then he gets to cock-a-doodle-doo for another while and we won't be eating cock-a-leekie soup for our Sunday dinner.

That was the bad news. The good news is that my latest sourdough loaf was a big success and my grandson James thought it was delicious. Sadly, no pictures of the loaf for it got scoffed far too quickly. All I can offer is this picture of James after spag bol and a bowl of yogurt. I wonder if he would like some chicken soup? 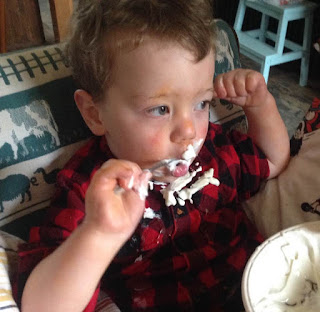 Glad you are enjoying spending time with Katy and James.

(I think you need to unfollow Fillet as the blog is compromised!)

Was sad to wave goodbye to them today. Removed Fillet and a few others while I was about it.

Don't remove me. Yes, chicken soup is a great idea.

The only way you ever get removed Mage is, you lose your marbles and
start supporting Trump!