Well, who knew? It seems that fun is definitely much more tiring than work. Katy and James arrived on Monday afternoon and we had an action-packed few days during which James did far, far more than anyone. 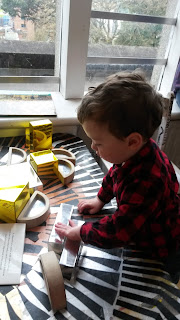 On Tuesday we all went to the Ulster Museum. That was a busy day. It was a child-centred visit which meant that there was building, painting and drawing to be carried out. James discovered that the art galleries were marvellous echo chambers and he made an awful lot of noise. I only noticed one person who minded. Surely anyone who visits the Museum in the Easter holidays should expect it to be brimming with children and, if they are decent coves, they should be jolly pleased about it. Martha and Evie are frequent visitors to the Museum and they had a wonderful time showing James their favourite places, 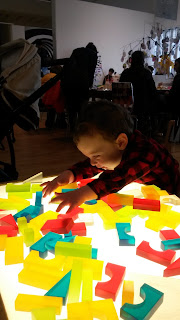 On Wednesday James went on a playdate to Martha and Evie’s house where I am told, he tore around the house like a whirlwind and then ate an enormous lunch. It seems he got on very well without his Mama as all well-adjusted boys should – for an hour or so at least. Meanwhile, Katy and I lunched and perused charity shops. I bought a straw hat for Bert, some wool for Zoe and a chiffon cloak for the girls’ dressing up box.

Yesterday, we went to Ballycastle, amused ourselves at the amusements, went to the beach, went duck-watching and all that before lunch. Lunch was outdoor fish and chips at Mortons where I made two new friends. One was a single-legged seagull and the other a very cheeky jackdaw who perched on my shoulder, sauntered down my arm and tried to eat my fingers. My grandchildren took all this in their stride as if it was the most usual thing for grannies to have tame jackdaws strolling about their upper bodies.

It's likely that the highlight of James' trip to the seaside occurred on the downward journey when we passed several miles of major roadworks. I don't believe the child had ever seen as much heavy plant in one place, ever. He looked left there were dozens of diggers and heavy tractors, he looked right - more of the same. He was entranced. 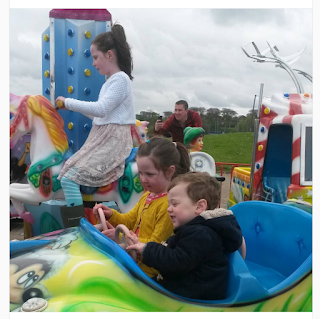 Tame stuff but at least he's in control

Today I got up at half-five and drove Hannah to work then went back to bed and slept until nine o’clock which was wonderful. James and I spent some quality time jumping in puddles, watching chickens, feeding cows, examining tractors and other assorted plant. We watched Sammy the Digger Man clean out a drain, then Clint spreading manure with his Davy Brown. For James there was no contest. Diggers are OK but tractors are his particular passion. It was a good morning. James and Katy lunched on Ulster Fries and then it was time to drive to the airport where I felt very sad to kiss them both goodbye. The plan is that I will visit Norfolk in October and, while I don’t expect Katy will have changed much (maybe just another few strands of silver curls), James will an inch or two taller and will have a much bigger vocabulary. Looking forward to it already. 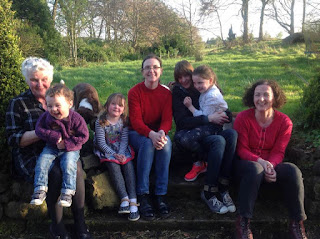 What a great crew...and yes, how fast they grow.

They do. It's almost scary.