Northern Ireland is currently experiencing Summer Time and I have been making hay while the sun shines, or sort of... I have been weeding, sowing and planting and Nelly's Garden is actually looking OK. If it wasn't for all the interruptions life would be great.

First of all, I took Saturday evening and most of Sunday as a vacation from what the Americans call yard work. We went out for dinner with the Banjos and slept over. Then on Sunday, we all went to Garden Show Ireland. It was Marty and Jazzer's first visit (even though they live in Antrim) and I think they enjoyed it. I bought my usual geranium and wanted to buy some white papaver Orientale but missed out on pot plants so bought root cuttings from a beautiful Dutchwoman. Two white, two salmon pink and two red. Hope they grow! Going around the exhibits I realised that my bay tree is probably worth £120 and that the three trees I'm nabbing from Bert would cost me nearly 500 if I was buying them from a garden centre. And - the half dozen lupins I'd planted the day before and that were grown from a teeny little seed were worth nearly fifty quid at Garden Show prices. I actually felt quite rich.

Monday was family gardening day and it started off well when the black and white cow had a healthy bull calf standing by her side first thing in the morning. Then there was great excitement when Evil Edna started to show signs of imminent calving. Unusually, for Edna, she was considerate enough to hold off on the big reveal until the girls' homework was done, then had the calf birthed just as supper was being put on the table.

Yesterday Hannah and I went shopping in Antrim. I bought a hand weeding tool and Hannah bought socks. Bored with the shops we went to the Castle Grounds to walk. The council workers were still clearing up after Garden Show Ireland and I found a lithodora 'Heavenly Blue' in a bin and nicked rescued it. Another £7 saved.

Today, nothing much to do so worked in the garden. Planted geraniums, crocosmia 'Lucifer', cosmos, potentilla' and used my new weeding tool which is very useful for grubbing up dandelions and creeping buttercup. It was a very enjoyable day except for the invaders. First, there was the chicken escapees, three of the young hens that have no trouble flying over the fence. They spent the day in the flowerbeds gathering up grubs and insects. 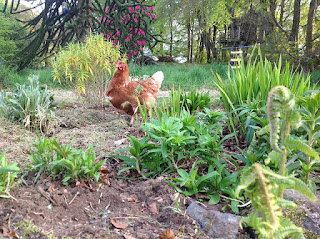 Then I was wandering around taking pictures of this and that and heard this crashing noise and there was... 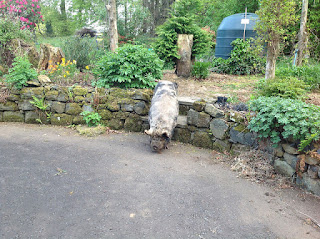 ...Lily, who had to be quickly headed off before she started trampling on my freshly planted flower beds.

The next invader was driving a shiny red car that whizzed into the yard with one door hanging open and that turned out to be a mother and child delivering leaflets for a church lecture. I'd already noticed posters for this event in the village and was astonished that such people still walk among us. I told the woman that I was a firm believer in evolution and she looked at me very askance. She suggested I should come and add to the debate. I said I probably wouldn't. 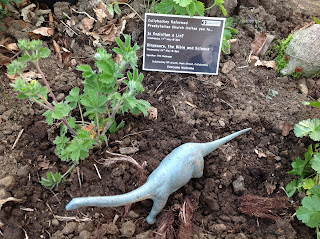 Click to enlarge and get a better look at Evie's plastic dinosaur and the potentilla and geranium that flank it. The invite from the crazy people is propped against the alpine strawberry.

They are going to be delightful. Reformed? The two beasties will take care of evolution. :)