The Truth About Nelly's Garden

Everyone should know that Nelly is an enthusiastic gardener and a knowledgeable plantswoman - or is she? You might have seen the photographs that seem to prove it - on the blog, on Flickr, on Facebook and Instagram. It's time the truth was told.

I am an enthusiastic gardener on fine days. Late autumn, winter, and early spring are far too cold and dank for anything other than minimal effort. And yet, a proper enthusiast would be out all year round except maybe for December and January.

The photographs? That's down and judicious cropping with the very occasional use of photo-editing. That is rare though for I'm not much good at Photoshop either especially as I actually use GIMP. I might remove a blemish from a petal or get rid of an unnoticed piece of debris.

I love to sow seeds and take cuttings and make beautiful plants that I can plant in my garden in spring. Then I either forget where they are or even what they are and by the time I get back to them they are no longer healthy or beautiful. Example - I sowed a lot of wallflowers last May and potted them on and then, instead of planting them out in the autumn I left them standing by the polytunnel all winter. By the time I got to them, something had beaten me to it, the wind, the cold, vine weevil, maybe all three and less than ten percent were salvageable.

This is what I imagined... 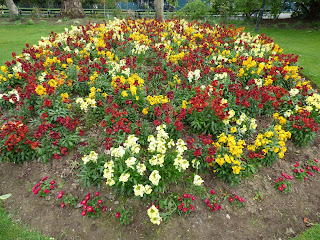 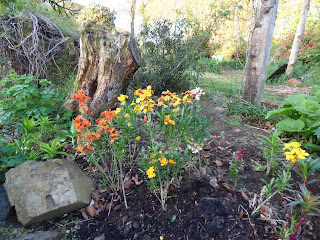 Meanwhile, I'm really looking forward to the iris blooms, the geraniums, the lupins, the aquilegia and all the other early summer flowers. I'll be taking lots of photographs and making sure that weeds and scruffy things don't feature. They'll be there - just not in the pictures.

I have just planted a lupin and about two dozen alpines in a newly stoned border, trying to go low maintenance. I'm sure your garden is lovey.

I'm always tempted by the idea of low maintenance but never seem to manage it. Yesterday I planted four lupins, grown from seed I gathered in Vancouver, and found two forgotten and almost dried out alpines that I have yet to plant. They will look lovely for one season then it will be a battle to stay ahead of the weeds. The problem is my planting has no boundaries as there is just so much possible garden ground around us. I need boundaries!

I too used to be a dedicated gardener. Now I forget even to water my potted plants.

If it wasn't for writing it up on my blackboard I'd forget too!