Around five o'clock yesterday while planting in my raised bed I spotted a flying creature that I was sure I'd never noticed before. It was feeding from a patch of sweet william (dianthus) at the end of the bed. I stopped to watch it. Its wings were a blur, tinged with orange and constantly in motion as it moved from flower to flower. Its backside was bulky, dark blotches on a pale background and the proboscis was long and black. I called Bert over to see it and he was quick to identify it as some sort of hawk moth. After about five minutes I thought I'd fetch my camera from the house and the hawkmoth was still there when  I got back. But I was still too late for it had finished with the flowers and flew off before I'd even removed my lens cap.

Later on that evening we researched the butterfly sites and identified it as a hummingbird hawk moth. or macroglossum stellatarum. One interesting observation was the moth often returns to the same feeding site at the same time every day.

So today, hopeful, moth and camera ready I headed for the polytunnel to await my visitor. Perhaps it wasn't warm enough, and maybe too windy, for it didn't show and I had to make do with this Red Admiral which also seemed to be enjoying the dianthus patch. 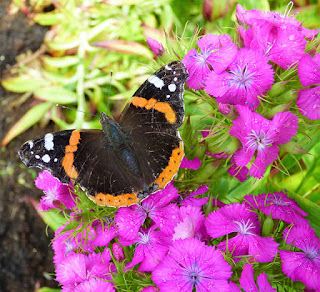 One thing's for sure, and Zoe agrees - we are definitely going to continue growing flowers alongside the vegetables in the tunnel for not only are they gorgeous, we are also getting a greater variety of insects visiting us. Good pollinating insects. And often we don't have to sow these flowers for they just turn up. 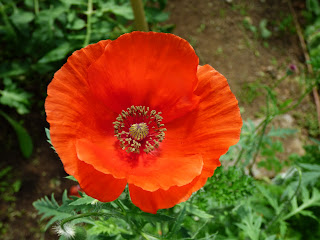 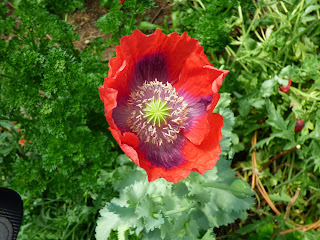 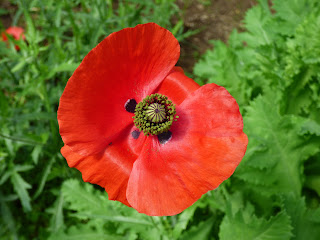 At the present time there are several varieties of red poppies growing beside the veg and another, Zoe's bread seed poppies are just about to bloom. We also have foxgloves, nasturtiums and marigolds growing freely. All are self-seeded. 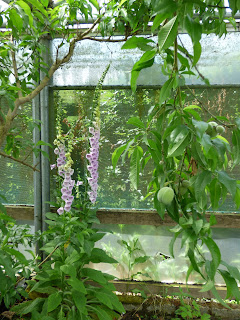 If all goes well there should be a decent crop of peaches this year. This tree is supposed to be espaliered but Someone must have forgotten to prune a branch.

So I'll be on the lookout again for the hummingbird hawkmoth but, even if I do get a picture it won't be as good as this one.

Goodness, I am left with lots of WOW's. What a wonderful critter.

Thanks Mage. I'm reminded of something my mother once said to me.

"I spend a lot of time just looking out the window just watching the birds."

And I thought to myself, that woman has little to do with her time.

It seems that I am becoming that woman and watching the birds, the bees and the butterflies turns out to be a pretty fine way of using time.

Love to be outside early in the morning and watch all the bees, bugs, and birds.

I find I am becoming kinder to bugs and critters as well - rescuing spiders and bumble bees from water butts and squashing less slugs. Mind you, I thought I saw a rat slip out of the hen house last night... not so sure about that.