All The Flowers I've Never Grown. The Himalayan Blue Poppy 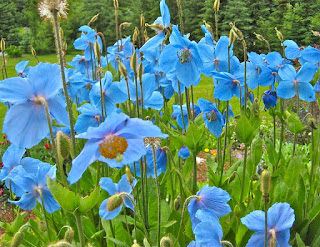 The beautiful Himalayan Blue Poppy is a plant I have long yearned for. Yet it's not entirely true that I never grew one as just once I started them from seed - Thompson and Morgan seed. They are famously tricky to germinate and I only managed three pathetic specimens. The best of them grew to eight inches tall and produced one flower after which it wilted and died. The other two expired without flowering. I'm not sure what went wrong but I never tried again.

I had convinced myself that they just wouldn't thrive in the soggy Irish climate until this one time I passed a shady garden on the Hillmount Road near Cullybackey carpeted with beautiful blue poppies. I never saw them again. Occasionally I see the Blue Poppy at garden shows but they are always expensive and I'm loth to part with my hard cash as one plant would not be enough. Six would still be niggardly. There would need to be, at the very least, a dozen to make a half decent show and that wouldn't leave much change out of a hundred quid. And then they'd probably die after one season.

Maybe I should try again. After all, it's been more than twenty years since that first bitter disappointment. Since then more than two decades years of growing experience gained and nothing to lose but the price of a packet of seeds. Keep you posted! 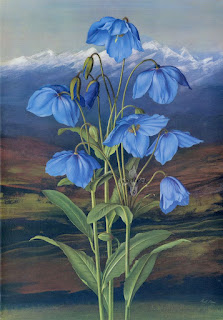 Go for it! You may be lucky
London Sister

Apparently, they don't mind shade. Maybe I threw too much at them.

I hope you try again. Wonder how well they would do here.

and this site has a great description on growing them: http://www.seedaholic.com/meconopsis-betonicifolia-himalayan-blue.html