Could Bert be trying to tell me something? The other morning he told me this really cute story about the pigs…

Y’know, every morning since the apple harvest I’ve been giving Rusty and Lily a big Bramley after I take them out to the field. They get it just after I shut the gate and Lily always takes her apple to a special place beside the hedge and Rusty, well he just stands there and wolfs it down wherever he’s standing. This morning I got distracted before I shut the gate and the pair of them must have turned back to see what was going on. Well, they found the apple barrels and Lily, she lifted one and took it to her special place and was eating it as dainty as you like. Meanwhile, Rusty was snout-deep in the apples munching away without a care in the world.

They have such different personalities.

Yeah. They do. Tell me this – which of the pigs would be most like you, Lily or Rusty?

OK. Lily’s most like me because she’s a lovely pig and Rusty is like you because he’s a rough, scruffy brute.

OK. I get it! You think Lily’s like you because she’s such a dainty eater and Rusty’s like me because he’s a greedy pig.

Yes, that’s what I was thinking. 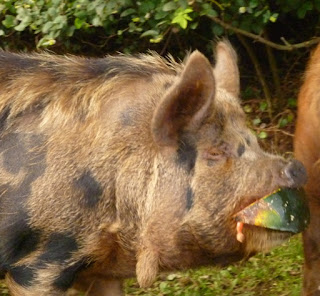 I know! But perhaps I do need to be a little more mindful around food.

Perhaps, but you are not that scruffy.

Pigs are smart, too, so your covered!