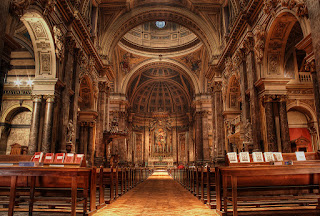 The last time I was in London I went with my sister to the Church of the Immaculate Heart of Mary, better known as Brompton Oratory. That was where our Grandfather Ned attended Mass when he lived and worked in London back in the mid-1940s. Granda worked on building sites as a plasterer and the work was long and hard but Sundays were his free day and it must have been a pleasure for him to be part of the Oratory congregation with its fine tradition of choral music. My grandfather loved sacred music and was a longtime member of the choir in his local chapel.


Granda was working in London when he got the word that his sixteen-year-old daughter Peggy was seriously ill with meningitis and not expected to survive. He got the train to Liverpool to catch the Belfast boat but when he got to the docks he discovered that his pocket had been picked and his wallet was gone. There wasn’t enough money for the boat fare and he had no other choice but to return to London. When he got back his workmates had a whip round and gathered enough money for him to make the journey again. Ned arrived back just in time to spend a night at Peggy's bedside before she died.

All these things went through my mind as I looked at the gorgeous beauty of the church. It must have seemed very special to that wee man from Randalstown and perhaps went some way to make up for the loneliness of the migrant worker far removed from home and family. Then the organ music began. I didn’t recognise the piece but it was wonderful, so beautiful that I thought I might cry. My sister was just as moved as I. When it was over we left, almost in a daze, for our actual destination the Victoria and Albert Museum. We’d just called to the Oratory on a whim. I’m so glad we did.
Posted by Nelly at 8:32 pm

I'm so glad you did too. Thank you.

Mage, I appreciate that.

Awesome content written.
Kudos to the author.
I will definitely recommend it to my friends

That story has just made me realise how everyone of us need a boot in the backside and stop whinging as we don't realise how good we have it!