Nellybert have had a particularly sociable weekend and have not let the snow keep us back. Not a bit of it.

On Friday I went for coffee with one of my co-grannies. For thanks to our modern ways (divorce and re-partnering), many of today's children have more than the requisite two of each. Later that evening I met up with two cousins, one from New Zealand and one from Hong Kong and their respective husbands. Also, there was a second-cousin and his wife that I was meeting for the first time. We had an excellent evening of eating, drinking and generally catching up. No photographs were taken by me.

Maybe I was just a wee bit tired the next day but not too tired to take a walk up the snowy back lane with four dogs and a cat. See photographs. 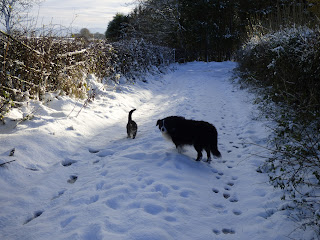 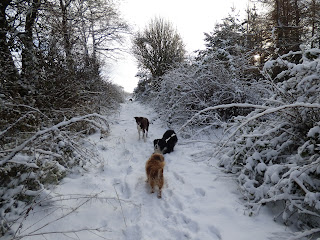 In the afternoon we were visited by co-grandparents Mick and Linda. No photographs were taken by me.

Today we called on some friends who were trapped in their house by snow. We brought some essential supplies and were given coffee and wine. I took this photograph of their Christmas cactus which is splendid enough to be given a place in the Palm House. 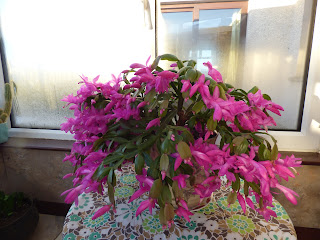 While we were there our friends were called upon by a young, red-headed man who was delivering a tonne of firewood. The young man was unable to drive his van up the steep, slippery and snow-packed driveway. Our friend ( a frail pensioner) had been trying to clear the drive of snow but the young man (still shaking from the great feed of rum he had imbibed on the previous night) took the shovel from him and cleared it in quick time. It was amazing. Now our friends aren't snowed in anymore which is good as they have invited us for supper sometime soon and I'm looking forward to that unless Mrs, who reads this, tells Mr that I called him a frail pensioner. Only joking Rob! Sure you're only two years older than I.

Off home again to cook a plain man's dinner of mince, carrots and onions, boiled spuds and steamed broccoli with apple crumble and custard to follow. We had two plain men coming, one whose wife never boils spuds and another who only knows how to cook potato dauphinoise. Hannah is not a meat eater so I served her a healthy little dish of egg and chips which I believe she enjoyed. The meal was a great success except that Bert has started to crake on about never getting potato dauphinoise. No photographs were taken by anyone.
Posted by Nelly at 11:34 pm

You are so funny and delightful.

Oh thank you, Mage. You delight me with your comments.