The Day Before Christmas Eve

Pulling into the Tesco carpark at a quarter to nine to buy the sort of things that cannot be found in Cullybackey. Things like almond flakes and mascarpone cheese and gin. I thought I'd be stealing a march on the day but the carpark was almost full to capacity. Inside was just as crammed. There were the usual desperate men looking as if they had been cast in the fiery bowels of hell and were being pitchforked by devil's imps. There were people who hadn't seen each other since last Christmas and were wishing each other season's cheer as they caught up with the gossip in the aisles. And there were people like me, organised people clutching long lists. There weren't many of us but we noticed each other. I was so prepared I even bought a copy of Amateur Gardening to amuse myself in the queue for the checkout. There were two free packets of seeds with that so essentially it was free if one didn't take into consideration that I didn't actually need another packet of mixed cornflower seed. The mixed woodland one will be useful especially as it features the sort of campanulas that used to grow in Currels Avenue.

When I got home I was rather pleased with myself. I had smiled at lots of people, had several chats with strangers and had managed not to kill the cat that ran out in front of my van on the Galgorm Road. Hannah was home just before me after completing a shift that began at four a.m. And Bert? Bert was just getting up. He must have heard me put the kettle on. 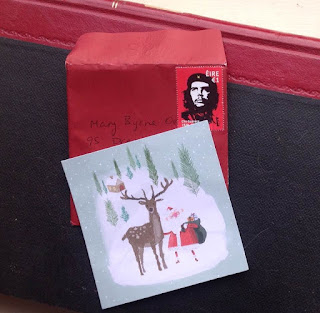 Lovely....glad you got home ok. Merry Christmas to you all.

And all the best of seasonal greetings to youse wans too. I was kinda off social media this Christmas - hope everyone had a good one!