Jazzer and I had our Works Do in Belfast on Saturday. We went to the Ulster Museum, the Palm House, had drinks in The Apartment and lunch in Actons. A very good day out but with one problem. Scooters!

The Palm House in Botanic Gardens is a tranquil place. There is always something wonderful to look at no matter the season. It is frequented by decent, civilised people and I never, ever go to that part of the city without calling in. But on Saturday that tranquility was disturbed by a brat on a scooter. He was around seven or eight and accompanied by a doting grandparent who looked on fondly as the little wretch sped around on his wheels whooping and yelling as he went. How I longed to warm his ears. The grandfather's of course as the child knew no better.

Then as we left the Palm House we were accosted by a six-month-old pup which leapt all over us with its muddy paws. The owner and young son were mortified - well, Dad was - son didn't give a hoot. But that was a different matter as the dog was in a park and was quite within its rights to be enjoying itself. We told the owner we weren't at all bothered, loved dogs, loved their dog and a very pleasant encounter it was.

Our next run-in with the scooter menace was in front of City Hall. A male youth, probably fifteen or so, on a scooter, ploughed into a crowd of us crossing the road and nearly knocked me down. I'm afraid I broke sweet little old lady ranks and called him a fucking idiot. The young hooligan was followed by another riding just as recklessly and I was really hoping for a third so I could knock him over. But there were just the two of them.

So it seems that scooters are a thing. I would have thought that teenagers were too old for them but it seems not. I plan to carry a stout stick the next time I go to Belfast. It would be worth the court appearance. 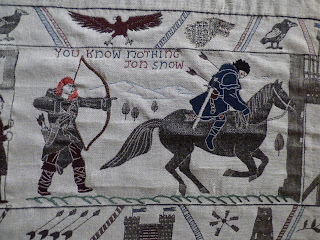 What we saw in the Ulster Museum 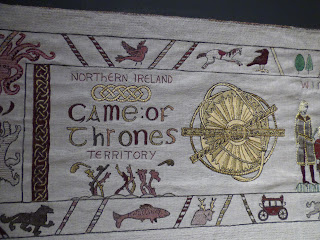 I totally agree re scooters, they are a complete pain whether it's toddlers, kids or adults - especially in the flipping supermarket!!!! London Sister

Nelly do not go to Barcelona it would seem people of all ages need to be on wheels - scooters, skateboards, segways. It was a nightmare!

I can't understand why places don't ban them outright.