The Day After St Stephen's Day

Apart from posting a few pictures on Flickr, I did not spend much time on social media sites over the holiday period. Reason being, I went to Instagram on Christmas morning to see if there were pictures of my grandchildren opening their presents. There were not but what was there in abundance were pictures of other peoples cosy, firelit, candle-glowing evergreen and berried interiors which threw me into a mild depression as I didn't even try the fairy lights until Christmas Eve and they didn't work so no tree! I missed it very much. So instead I continued with the uploading of archived photographs to Flickr. it was Cullybackey's turn and this was the picture I chose to show the world on Christmas morning. 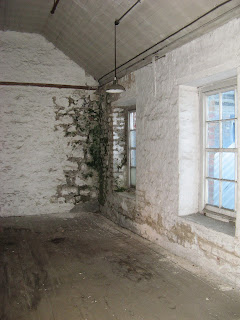 An interior of a disused factory just outside the village. It could hardly be less hygge although Hannah did point out that the patch of mould in the far corner could definitely pass for a Christmas tree. Next year I'm buying new fairy lights and there will definitely be a tree!

So Christmas Day passed in a blur of cooking, eating and drinking. We watched one thing on television and it was a parcel of shite despite having Christmas trees galore, right way up, suspended from the ceiling, sideways etc. It's perfectly OK going mad on the festive greenery when there is an army of liveried servants to do one's bidding. That's right - I'm ashamed to admit we watched Victoria where Royal children went out in the snow with no hats when everyone knows that one wet flake would kill a child stone dead from consumption or a chill in Victorian times. In my defence, I will say that I kept dropping off to sleep during the turgid dreariness.

St Stephen's Day was much more relaxing but that's for another time. Except that my daughter very wisely pointed out that I might have started Christmas Day a little better if  I'd actually got in my vehicle and drove to town to see my actual flesh and blood grandchildren enjoying their presents instead of faffing around on Instagram and Facebook. Good point Zoe.
Posted by Nelly at 9:35 pm

And a belated Merry Christmas to you.
OK, go get a live tree in a pot or a fake one in a box. You will be ready for next year. :)