A Cure For Sure

Roy had his operation today. Not on the growth as the vet is going to leave that alone for the moment. Instead, the old lad had his testicles removed which will cut off the supply of testosterone to the lump on his bum and prevent it from growing. I hope it works.

So far, the old fellow has recovered well. He has enjoyed supper and taken a sedate dander around the yard.

Other news - I visited the pharmacist yesterday to inquire if she could sell me an over the counter medicine to ease my throat. She said that the most effective thing would be some sort of antihistamine but only a doctor could prescribe that. I said I had some in the house. She said I could give it a go. So home I went and raided the medicine chest. There were two cards of pills and I was sure one of them was antihistamine. This is where Wikipedia comes in handy. One of the pills turned out to be a sleeping tablet, the one that Bert took more of than he oughter when he first had the manflu. The second was antihistamine and Mumsnet opined that it would cure post-nasal drip, the cause of all my woe. A Cullybackey pharmacist and Mumsnet. This was a cure for sure!

Thirty minutes after taking it my nose had dried up and so had my throat. Hot tea wouldn't lubricate it and wine didn't work either. But the good news is I've had three of those pills now and I'm feeling much better and the throat is getting back to normal.

I have decided to begin clearing my attic seven minutes at a time. Today I threw out the box, leads and manuals from three cameras ago. It's a start. To celebrate this achievement I am posting a picture of my youngest grandchild. 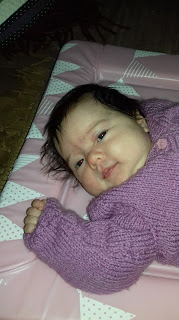 You are sounding better at last. Cute granddaughter on a nice quilt too. :)

very cute grand daughter... a seies of 7 minute clear outs..why didn't i think of that. sheer brilliance. thank you. ann.

Thank you Ann and Mage. I'm afraid I'm a bit behind on the clearouts. Up and at it tomorrow!