Sick Of Being Sick

It is a month now since I was in Norfolk and anxious that I would not carry the dreaded manflu to Katy and family. The very first night that I slept there I was woken up by that tickle at the back of the throat that is usually the first sign of a virus infection. For the first few days I was achey and sore and feeling well below par. Then I got the stomach bug and forgot all about the flu-like symptoms. Ten days later I was still feeling shitty - got home and found Bert wasn't much better. The virus travelled into my chest, a week or more of dry coughing then there were headaches. A couple of days ago I thought it was fading but no! Damned thing has settled in my throat. Still, mustn't grumble too much. It is years since I had such a persistent infection.

There was a rumour in Hannah's work that a tremendous amount of mourners at a recent very well-attended funeral had been struck down with this flu-like illness. Bert was certainly one of them as his symptoms began within days. Yet again, we must not complain as it turns out that the uncle of the fellow whose funeral it was caught the bug and died within a week. But he was well into his eighties, Bert and I have youth on our side. Well, Bert has anyway. I get my state pension this coming week. Fingers crossed I live to enjoy it.

Another sad story - bloody Beast from the East has destroyed my wallflowers and ceanothus. 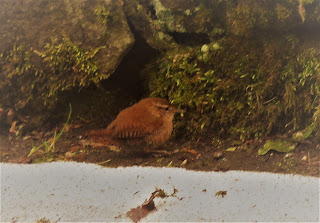 One of the many wrens who live around here.

Why not drag yourself into the doctor's office and drown that bug in antibiotics. The virus is long gone, but the after effects sure do sound contagious. Tell the doc how long this has lasted.

I did drag myself to a pharmacy and am hoping that the pills she advised work. If not, it's the doctor soon as I can get an appointment. We don't have to pay for consultations and meds here (which is great) but sometimes we wait a long time to see a doc.