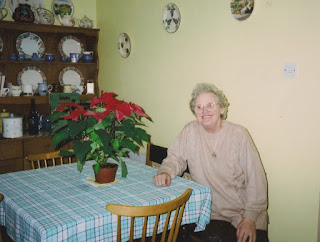 Although the house in Drumkeeran was the place I thought of as ‘home’ I only lived there for a very short time. In 1978, when I was expecting my middle daughter, I moved to Ballymena and lived in various houses there until Bert and I moved to a new build in Cullybackey. Nevertheless, the house on the Murphystown Road, where my parents lived was the place that I called home.

I was around seven when we moved to the Murphystown. It was a shoddily built farmhouse that belonged to people whose patriarch had never wanted it to fall into Catholic hands. Apparently the old man had died in the house and the moaning noises that I often heard coming from his bedroom might have been an echo of his dying or even a haunting, because his last wish had not been respected. Or, it could even have been the wind blowing through the rotting window frame. My father did not prioritise the maintenance of that house for his main interest was the development of the small farm the house came with.

We lived there for nearly twenty years before moving into a new bungalow that my parents built. That house is the one that my mother lived in until she died, the place that I thought of as ‘home’ for the next thirty odd years.

Our parents had hardly a bean when they moved there, all available funds having been used to build it so it was furnished on the cheap. It wasn’t exactly what our mother wanted but she made do. Making curtains, upholstering and painting and decorating. In what spare time she had left she also created a lovely garden, something she never had the space for before. Daddy was not a gardener but he bought a ride-on lawn mower and began to take great pride in his lawns. Over the years the house became more what Mum wanted. She had a bit more money to spare and she began replacing all the old stuff with better quality furnishings. She didn’t go mad though. She still had an eye for a bargain and many items were bought in charity stores. She became quite house proud.

I remember her saying many years ago,

I do try to keep this place nice but what with your Daddy and the dog it’s not easy….

When she got ill we all spent a lot more time at home. Yet it was only a matter of time that ‘home’ would be no more. That is when I started taking the photographs. The first batch were taken when she was still with us, the second batch soon after she died but before we cleared the house. It has taken until now for me to be able to look at them, sort them out and share them.

Both houses and all that came with them have left me with only beautiful memories and an unattainable desire to live it all over again. My first memory of the old house was being in the kitchen with Aunt Martha, my mother and father, I had my little white teddy with me and we all stared at the giant hole in the wall above the range where the chimney had caught fire. I could only have been three or four at that time. Such a special place for me and no doubt, many others who passed thfough it's doors.

That was a frightening experience. I was certain the house was going to burn down! Always had a tendency to catastrophise.

Made me quite sad seeing those photographs.

I'm glad you have pulled them out and are able to look at them.

I visited the house yesterday. So bleak now.