The Wrong Jelly and Other Stories

The girls are here for a sleepover and earlier today Bert took them grocery shopping. We needed some special ingredients for a sweet making session and for pizzas. He came back in a rage,

That Fullans is the worst shop in the world! They had nothing we wanted, No pepperoni, no anchovies, no mozzarella, no dislocated (sic) coconut! I'm never going in there again and all the staff do is stand about the aisles gossiping to each other!


But he proved himself a hero. Went to another shop, the trusty old O'Neill's, and got everything on the list except he bought packet jelly instead of ready made in a plastic tub. Jelly wasn't on the list but Martha convinced him that it was an essential. That's all very well but if the grandfather then fails to make the jelly and if at bedtime all a child wants is some jelly then Houston We Have A Problem.

So Martha and I jumped in the van and drove to Cully and bought the right kind of jelly. She was wearing a striped onesie and I forgot my partial denture but, who cares, we were on a mission. On the way back we went the long way and listened to Keltic Storm's version of  Mairi's Wedding three times. I love that me and the girls are so uncool we are actually cool and I'm sad that sometime in the near future they'll be letting me know that saying cool is no longer cool or even a thing. 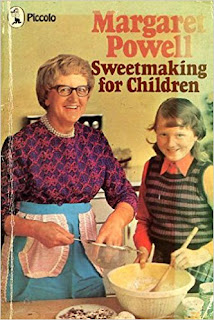 This is the recipe book we are using for the sweets. It belonged to their mother when she was only a little bit older than they are now although this wasn't the cover of Zoe's book. If it had been I believe it would have been thrown out long ago. Both Margaret Powell and her pupil look terrifying. The early seventies can still send shivers. 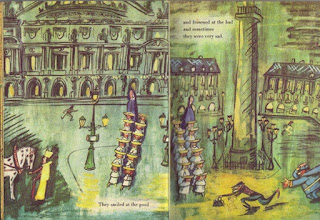 Sleepovers mean bedtime stories. Tonight we had Madeline, a great favourite of the girls and of mine. The books are a pleasure to read, short and bitter-sweet. Tonight's story was about the time Madeline had her appendix out and how all the other girls were so envious of  the attention she received. 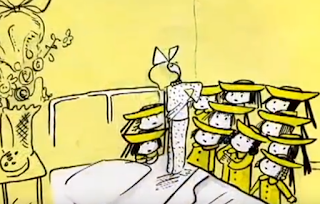 After that it was stories from real life.

Who do you want the story to be about?

What age do you want me to be? Forty?

OK. I'll tell you about my first day at school.


So I did. And I told them about Malachy's first day at school and how kind Mrs Magee was and how mean Miss O'Neill was and about the time George didn't do his homework and stood up and read an essay he was supposed to have written at home and stood there looking at two blank pages and told the story out of his head and how I admired his nerve and then Martin told Cassie on him and George got the ruler and how I lost respect for Martin for ever and ever. I explained how Mrs Magee was always Mrs because we respected her but how Cassie was called Cassie behind her back because we did not respect her because she was mean and cruel.

After that I tried to think up some stories about their Mum when she was a naughty little girl but I couldn't think of any because she was a rather good child. There is only one and as Martha said,

Don't tell us about the time that she cut out pictures from a book and glued them on the wall and said the dog did it. We've heard that one a million times!


They were freshly painted walls, though.
Posted by Nelly at 11:14 pm

I remember that book. Bert did better than Paul when I was making scones helpfully brought back tartar sauce rather than cream of tartar.

What a wonderful time spent with your littles. Enjoy they won't be little long...