There is a particular kind of child that I am very fond of and that is a child who has a morbid interest in dead and disgusting things. I was that sort of a child myself.


Years ago, when Ben was only a lad, we found a milk churn in the shed that had housed peanuts for wild birds. A few had been left moldering at the bottom of the container and a rat had climbed in and eaten its fill and then found that it was trapped. This happened more than once. By the time Bert realised what had happened and it was the sweet stench of dead animals that alerted him, there were at least five rats in there and only one was still alive. And what were we going to do with it. I said that the surviving rat had suffered enough and we should let it run free. So Bert upended the barrel on a piece of waste ground and Ratty shot out like a bullet zig-zagging to a place of safety.


The remaining contents of the churn consisted of mouldy peanuts mixed with a mummified rat, a couple of cannibalised rats and an out an out stinking rat. Ben was fascinated. It was a Bank Holiday and we were having people round and, as each group arrived, Ben wondered if they would be interested in seeing what had come out of the peanut barrel - we called it Ben’s Dead Rat Tour. I was slightly surprised at the number of folk who actually took him up on his offer.


I was reminded of this on Good Friday. The previous day Martha and I were exploring and I took her to see the calf’s placenta that Bert had hung on a tree not far from where the Dead Rat Tour had taken place a decade earlier. Like the gory little beast she is, she was delighted with it. She asked me why Bert had hung it in a tree and thanks to a conversation with Bert and some internet research I’d carried out I was able to tell her. In all the years that calves have been born here I hadn’t realised that Bert hung the afterbirth in a tree. Why? Because his father did it. Why did his father do that? For mine didn’t. Because it was lucky.


Apparently Johnny had a particular thorn tree he used but that’s gone now so Bert threw it over another tree. It was hanging fairly high so the dogs couldn’t reach it and Ziggy really wanted to. For it was his persistent barking at the afterbirth that drew my attention to it.


It seems that Johnny's habit of disposing of the cow's cleaning is an ancient tradition that is carried out all over the world. In Germany, the country folk hung the afterbirth on an apple tree to ensure that the cow would give birth again the following year. In Yorkshire a mare’s placenta was hung on a thorn tree to help the foal to thrive. Looking further, in South East Asia, Africa and North America human placentas were also placed on trees to bring good fortune.

I missed out on the rat photographs too. Sure, I took them but they don’t seem to have survived the occasional computer crash.

Martha and Evie had friends over on Friday and, following in Ben’s footsteps, she gave them a tour. First the new calf, called April and doing well and look, there is the afterbirth hanging on a tree! Shall we get closer and poke it with a stick? 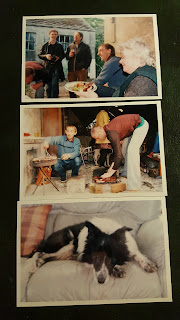 The day of the Dead Rat Tour barbecue. Ben is taking his tour to the right of that shed in the background. Sadly there is no photograph of the placenta but it looked rather like a red and cream satin ballgown all tattered and torn.
Posted by Nelly at 11:47 pm

Our neighbours do the placenta hanging thing. I thought they were mad but seems they are not alone :-)

Bert was very heartened to hear this.

Well that is a new one to me. What interesting legends of things untoward.