I had an argument with Clint this afternoon and I didn't even know it was an argument until he stormed off in a state of high dudgeon. My conclusion was that this meant the argument had been won by me.

The conversation started, as it so often does, on farming.

Bert drew my attention to a compliment that Clint had received from another farmer on his success with calf-rearing. I too, was complimentary.

We then went on to discuss Bert's imminent retirement from the cattle trade. Clint posited that Bert's experience in livestock was 'a disaster'. I took exception to that as he had managed to keep all cattle alive that were meant to be kept alive so it was hardly disastrous. Clint countered with Bert's failure to get cows in calf. I suggested that this was a disappointment rather than a disaster. Anyway, there was a little more in this vein and then the talk turned to the weather.

Everyone was in agreement that the weather was a real disaster. Clint said that the last good day we had was the Twelfth of July and I said that there had been the odd good day here and there but he insisted that Orangeman's Day was the last decent day we'd had. I expect he hoped that this might enrage me as I am a Shinner but I let it go. Instead I mentioned that I'd read a report in the Guardian that studies indicated that the Gulf Stream is now at its weakest since around 400AD. "And how would they know that," says Clint. I said, "Science."

Bert interjected by saying it hardly mattered what the weather was going to be like as Trump and Putin are going to blow the world apart. I think I have mentioned before that Bert leans toward a very simplistic and pessimistic world view. That led to a discussion about Trump which is a subject Clint and I usually avoid, him being an admirer as well as a card-carrying Brexiteer.  I said that if Trump's blustery tweets did turn out to be more effective than old-fashioned diplomacy then I for one would not be unhappy. Clint took this as a capitulation, that I had changed my tune on Trump. I took an opportunity never before open to me to ask him why he had supported Trump even before he'd taken office. He trotted out the usual. Breath of fresh air. Successful businessman. I took him to task on that one. He countered with one of the richest men in America, funded his own campaign... I picked him up on this,  for Trump only self-funded to a point... and the next thing Clint's storming off - which is where we came in.

And I've been feeling edgy ever since. 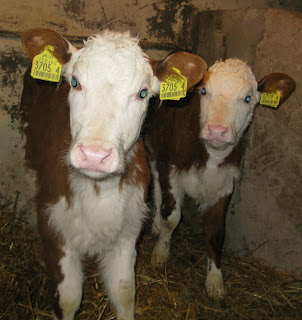 Amazing that Trump can cause arguments clear across the Atlantic! I wish I could argue at that degree of removal. Here, such a disagreement could end up with guns being waved about and possibly (hopefully not) fired.

We follow US politics quite closely here Ronni - the reason being that military decisions made in Washington can affect us too. One of my earliest memories is when Kennedy ran for President against Nixon, the result of that campaign causing great delight in Catholic Ireland. Another early memory was of the fear and anxiety caused by the Cuban Missile Crisis. So, you see, from a very early age I realised that what happened in the States could affect us in Europe too. This presidency feels unstable and unsafe. Worrying times.

Ai-yi yi! Trump brainwashing is rampant. Rather than "successful businessman" the orange *%$(#@@@ has been a criminal "businessman" since the start of his career. Although the brainwashed supporters will shy away from the facts.
Keeping cattle alive and healthy is something t be proud of. Will you miss them? I had a team of oxen and I still miss my boys.

I don't know if Bert's a good cowman or not, but if he can keep'm alive that's a plus in my book.
As for President Trump, I voted for him and will again. He is trying to right a great many wrongs done to the average hard working American, with little to no help.
It is too bad that more people can't see or choose not to take the long view. But then it's easier by far to call him names and rant about things that one knows nothing about.

I've never cared for Trump, not since I first heard of him decades before he ever considered going into politics. Where I a citizen of the United States I reckon I'd be a Democrat. Just as I'm on the left here in the UK and if we achieve Ireland united again which I hope to see in my lifetime I'd be very happy. So in the Irish sense I am a Republican. That used to confuse me a lot when I was a little girl. However, if the current president succeeds in helping the American people I will be very happy that he has done so and if, at the end of his tenure be it one term or two, he leaves the world a safer place I will be thrilled to be proven wrong about him.