Somehow, as a much younger person, I absorbed the notion that anniversaries were very important occasions and that personal anniversaries were particularly significant for women. Indeed, it seemed that one of the most unforgivable wrongs a man could visit on his female partner was to forget her birthday or, worse still, their wedding anniversary. But not Nellybert. Nellybert really does not give a fig.

There are two ways I work out those significant dates but only to the year. How long have we been together? That's easy enough. We became an item the summer before Miss Laura was born. Miss Laura is the daughter of the Mr and Mrs Wee who actually introduced us. That's not strictly accurate as it was Mr Wee who introduced me to Bert and the new Mrs Wee on the same evening. That was a couple of years before Bert and I started seeing each other. So, if I need to remember how long Bert and I have been a couple all I have to do is think of how old Miss Laura is. Although that used to be easier when Laura was younger. I always ask her when I see her.

Laura, how long have Bert and I been together? What age are you now?


We went to her thirtieth birthday party a year or two again so it's been at least that long.

Now the wedding date is easy enough to work out. It was a leap year which was the only way I could get Bert to tie the knot. So I tend to think of the anniversary in four-year gaps. The month was August and I can never remember the actual date without looking it up.

Still, I was a bit taken aback today to realise that I'd let our tenth wedding anniversary slip past unmarked and unremarked.  And missed out on all those presents made of tin! 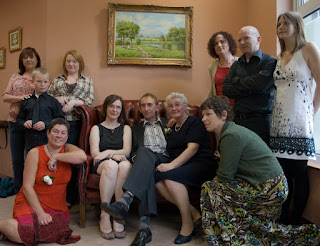 It was coming across this photograph that reminded me. Taken ten years and eighty days ago. And here are some more.
Posted by Nelly at 9:27 pm

You all are a lovely bunch.

Oh wow, such a lovely anniversary party! Loved reading through these details. I am also going to host a chic bash for my parent’s 50th anniversary that I would be hosting at the prettiest event space. Thinking to use a colorful theme for the decorations. If you have any recommendations, please let me know.

A business has posted a spam comment to this blog post. The link in the comment goes to a website that submits over 100 comments per day to blogspot sites with a link to their site as an opportunity to make their site look more popular to search engines like google. If you read the comment and look at the link they inserted, you will notice it is not helpful to your readers and it doesn't even make sense to be linked other than for their own business needs. If you would like to mark it as spam to prevent them from using you, follow the instructions here: https://support.google.com/blogger/answer/187141?hl=en