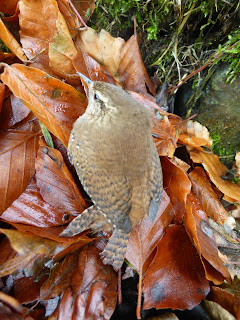 Going into the kitchen this morning I spotted a little creature, skittering about, hiding behind the compost bin. My first thought was rodent but it was a wren. I tried to catch it, but it evaded me and made for the hall. I captured it (gently) by the front door. Outside. I hoped it might fly away but it couldn't so I laid it on a pile of beech leaves in the corner of the garden steps.

The culprit had to be a cat. Although no cat was to be seen. Our dogs police the cats so perhaps they harassed it into dropping the wren. Who knows?

There was a time when I might have thought it my duty to try and save that bird. Now I realise that doing so would only prolong its agony. If it was to die it would prefer to do so outdoors and without the interference of well-meaning humans.

Nevertheless, when Bert returned from an errand I told him what had occurred and as we approached the wee bird again it managed to fly towards the safety of a clipped buxus. So we couldn't see it any more. We left it. I like to think it recovered from its ordeal and was fit enough to continue its life on this earth. And, if not, it was still a very good year for wrens.

Cats are fuckers.
Posted by Nelly at 6:41 pm

Yes, they play with them if they don't eat them.

They are horrible, yet I have two of them.