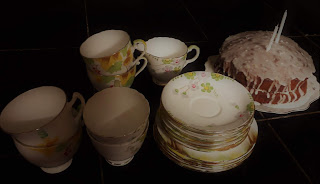 Monday Supper day and as it is Dave's birthday tomorrow we had cake for dessert, got out the fancy vintage china and put two candles on his cake.

These are traditional arrangements. We always do it. According to Miss Martha anyway.

1. Making Monday supper for Martha's folks. This has been happening since Martha was a foetus. Around ten years now.

2. Having a birthday cake on the Monday closest to someone's birthday. Been going on since Martha was old enough to take notice of birthdays. Six or seven years.

3. Getting the old bone china out. I did that once for Martha's birthday. Next birthday along had to do it again. Because we always do that. Been doing it ever since. Couple of years now. Last week, Evie's birthday, I trotted out some old pastry forks I found in a charity shop. New tradition. Martha is talking about getting napkins.

4. Having a system for candles on an adult's cake. Add the individual numbers of their new age. If needs be, add them again until a number between 1 and 9 is produced. There are two candles on Dave's cake. Care to guess what age he will be tomorrow? 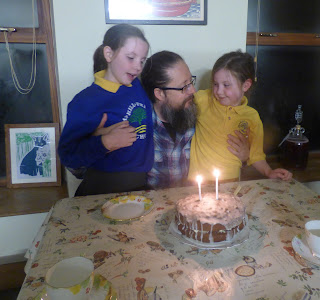 The cake was flavoured with ginger and the filling was lemon butter icing with a lemon glazing. It was a bit wobbly (my trademark) and was delicious.
Posted by Nelly at 11:00 pm

Oh, it does sound glorious.