Kerry Sister tells me that the part of Ireland she lives is full of people who would begrudge you a compliment. That way of thinking is described in the phrase,

Sure, she wouldn't give it t'ye.


Here, in the North, we are fulsome with our kind words and praises.

Sure your hair is lovely! Where did ye get it done?

Look at ye! You're getting younger looking every time I see ye!


That's the North for you. (Or maybe that was just Sheena?)

Now, Bert. Bert wouldn't give it t'ye a-tall. Especially when it comes to cooking. When it comes to cooking he's a harsher critic even than Martha. Swisser still talks about the time he went to the Sizzlin' Sausage rather than partake of another of her low-fat, vegetarian stews. So, I suppose I should know better than to ask him if he enjoyed anything I've cooked.

What do you mean? What was wrong with it?

I don't really like chicken soup. The stock was cooked too long. It tasted boney.

What did you think of the pasta sauce?

Did you enjoy your porridge?

Did you put salt in it?


But we hit a new low the other day. I'd been making beetroot wine using some giant beetroot that Zoe grew. With root veg, I only use the liquor they are boiled in so the pigs get the actual veg.

They didn't seem that fussed about it.


I can't even please the pigs with my cooking! I'm going to stop asking him and just sling the hash and let him and the pigs like it or lump it!

Now here is someone who enjoys my food. Especially when it is chocolate Aero birthday cake. 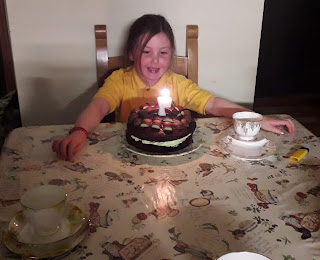 That's a great birthday cake,
And if he can't say a kind word about your cooking, tell him that it's his turn to cook now. LOL