Monstera Deliciosa (Tales From A Room) 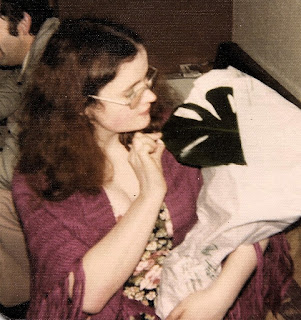 I look back at this picture taken Christmas 1976 ( I was 23) and it brings back so many memories. That dress. Floral, bought from the Go Gay Boutique (yes, really!) in Lower Mill Street, Ballymena. It was floor length, fashionable then and showed a lot of cleavage which I was shy about hence the long fringed shawl. Silly to be shy, for I had a most magnificent bust. But unlike maxi-dresses and fringed shawls,  bosoms were not so fashionable back in the mid-seventies.

Who was the guy in the background? Somebody sleazy, masquerading as respectable. He sired a child back then that he ignores to this day. Shame on him. Nothing to do with me.

I remember that night so well because I was to meet a boy at that party. Someone I'd been seeing for a while, someone I thought I was in love with. Heck, I was in love with him in the way people are before they know what love is. He jilted me that night. Went off with someone else and broke my heart. I knew I'd been stood up when that picture was taken and I was pretending not to care.

The plant was a Swiss Cheese Plant, a Christmas gift from my friend Rosie. I had it for years. 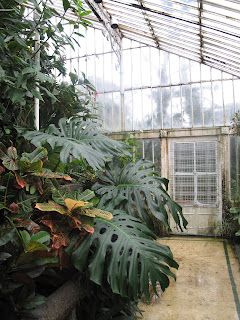 Forty years later and a favourite haunt of mine is the Palm House in the Botanic Gardens in Belfast. There the Monstera Deliciosa plants are enormous. That picture only shows a few of the leaves at the base of the plant. That baby is more than ten foot tall. So I'm yearning to have one for myself. On my most recent visit to Ikea, I said to Zoe, 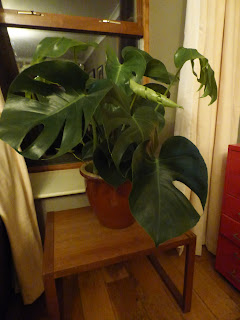 Call back in several years when it's ten foot tall.
Posted by Nelly at 9:11 pm

If only I’d known you were after one! I re-homed your mothers many years ago. It has been chopped down a few times but seems to live despite neglect!

Worry not! It is only very recently that my yearning for a Monstera began. Just as long as you look after Matty's Cheeser.

I inherited one of those many years ago. When we move into this place, I gave it to my eldest . It was too big for our new patio. It's now even bigger and lives outside. They do grow fast.

Tough as they are I don't think a Swiss Cheese plant would survive the outdoors in this climate. Be great if they did.