I've been on tenterhooks all day. Even though I don't actually know what tenterhooks are although I intend to find out before this blog post is published. One could even say that I have been 'on eggs' which means nervy, slightly anxious, worried about sudden a move or commotion that might damage one's eggs. What has me on tenterhooks, on eggs? Three things, in order of importance from not to a lot.

First thing - will I get the dress I'm intending to bid for on eBay? I love shopping for clothes on eBay. I relish the thrill as the final seven seconds ticks by. My bid goes in at eight seconds to the finish which is far more fun than Auction Sniper. Of course, I don't always succeed but it's all part of the game.  And I got the dress.

Second thing - will Theresa May survive the confidence vote? It's not that I like her or anything but the wannabes waiting in the wings are mostly a crew of despicable blackguards and a leadership race at this time of crisis is the last thing needed. I still hope that Brexit will not happen although that seems unlikely now. If it does happen my next hope is that Ireland will be whole again and that Scotland declares independence. May survived it.

The third and most important thing - a friend got some really good news today after a worrying health scare. Relief reigns. Thank you. 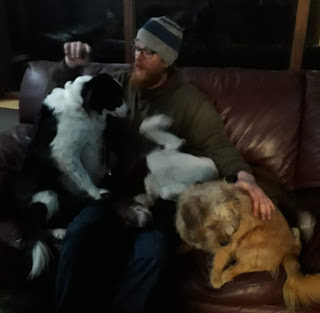 See the dog in the middle? That's Judy. She's a floozy. I'm not sure what exactly a floozy is or even if a mongrel bitch can be one but I intend to find out before this blog post is published.

See the fellow that all the dogs are sitting and lying on. That's Peter. He loves Judy and Judy loves him. At least she did until another visitor arrived then off she went to schmooze with Trev. Peter was sad. Trev's beard isn't anything like as long or as red as Peter's beard. And we all thought that dogs are supposed to be loyal. Not Judy.


Oh dear. The floozy definition is rather judgmental. And Judy definitely doesn't have casual sex with our friends - unless intense sniffing of beards is some sort of foreplay.