A Bit Of A Siege

It was Bert who I first heard using the expression 'a siege' to describe a situation that was somewhat fraught. It must be a Northern Ireland Protestant thing, Derry never far from their minds, the taste of rattus norvegicus still on the tongue.

Well, it's been a bit siegy at Nellybert's this past week or more what with all the dog visitors (Gracie, Maya, Dora and Jack) and the kitchen fitting. Good news. It's nearly done. It's almost functional but, as it is sore in need of decorating, there will be no photographs until that is completed.

Today was a complete siege. Thankfully I had Zoe by my side to support me through it. It was The Return To Ikea.

There was a lot of stuff to bring back. For some reason, Ikea sold and delivered to us an entire set of drawer fittings for a unit that was meant to be shelved. So that had to go back as did various white bits, some superfluous fittings, a damaged door and some knobs that we'd changed our minds about. The whole lot came to about £250. Shame I'd lost the original receipt. So it was off for a bit of a wait and a people watch at Returns.

There are some funny people around. One woman returned three packets of paper napkins. I cannot imagine bothering to do that myself. I'd have kept them to use another time even though when that time came I'd have totally forgotten where I'd stashed them.

Eventually, my number was called. I wheeled my laden trolley to the young man's desk and began explaining that I was going to be a complete pain in the ass as I had no receipt as it had become buried under four grands worth of kitchen and then I'd gone to Amsterdam and never saw it again.

Amsterdam? he said. No problem, he said. And then efficiently worked his way through everything while telling me how much he loved Amsterdam and how he'd been there eight times and was going back in July. Did I partake? he asked. Sure, said I. When in Rome and all that.

As sieges go, that part wasn't too bad.

Zoe and I had arranged to meet in the restaurant. I was to phone her when I was done but, siege!, no coverage. Eventually, I had her paged. What's the name? asked the Ikea co-worker. Zoe Surname, I told her. Soon this message rang out throughout the store,

Customer Announcement. Can Zoe go to the restaurant where her Mum is waiting for her?

I was worried that there might be flocks of Zoes descending on the restaurant but just one turned up. My one.

We had the usual run through the store. I replaced handles and damaged door, bought another pull-out tray for the larder and inserts for the cutlery drawer. The door and tray had to be ordered, paid for at the till and collected from another desk. Somehow, between the till and the collection desk, I mislaid the receipt and another one had to be printed. Siege! Meanwhile, Zoe started gathering her bits and pieces to take to the van and somehow between the till and the collection desk and the van a little alarm clock she'd bought for her youngest daughter was not to be found. Siege! First thought was that it had been left at the till but apparently not. What happened next was that an Ikea co-worker had to take details and then go and watch security footage whereupon she returned and informed us that they had Nelly on camera picking it up at the till and placing it on top of some shelf brackets and then leaving the till area. So that was gone. Dropped somewhere and picked up by someone who has got themselves a free alarm clock. Good luck to whoever it is, may they never oversleep again.

To console ourselves for the loss of Evie's clock we returned to the restaurant and ate cake. Nothing else for it. As siege tucker goes that had to be a whole lot nicer than boiled rat. 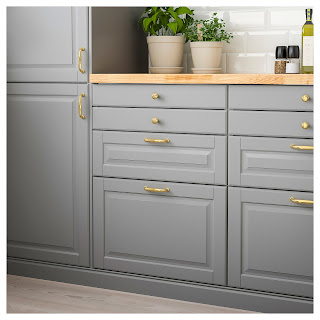 This is the style of our kitchen. Not the handles. Ours are black.
Posted by Nelly at 11:42 pm

Are we allowed to see before and after pictures? This is a great style.

There are many, many before socialising pictures. The kitchen is almost finished but tiling and painting still has to take place. Bert has done a tremendous job, saved a fortune in fitting costs. I might take some initial pictures tomorrow.