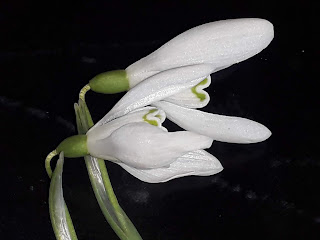 I was making a sauce and got out the plain flour and wondered if there were mites wandering its surface. You know how it is, if one fixates on an idea then one visualises it. I could really see those mites travelling the flour dunes. Marty came in, I asked him if he could see tiny creatures marching over the flour. He could not but he was fascinated by the idea. I don't think he knew such animals existed. Of course, I assured him that even if there were mites in the flour they would be no threat to our health and might even enhance the protein count in a very small (miniscule) way. That is when he told me he had a magnifier app on his phone. So we used it and there were no discernible mites. And I made the sauce.

And isn't technology amazing? Who'd ever have dreamed we could have an electronic magnifying device in our pocket for an affordable price? Not me. But someone did and then made it accessible to me as long as I looked occasionally and briefly at some dreary ad. Since then I've been taking photographs of this, that and everything using the magnifying app. The first one was Bert's mole that he has been treating with cannabis oil. It's too horrible to share and I really think he ought to show it to the doctor. Much nicer are pictures of flowers although they are in short supply midwinter.

This one is pretty. 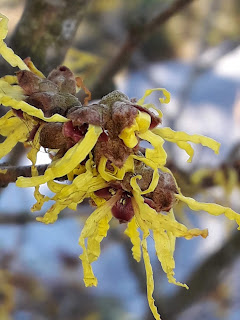 It's witch hazel, Hamamelis pallida, apparently deliciously scented but I usually have a sinus cold at this time of the year so don't get to appreciate it. 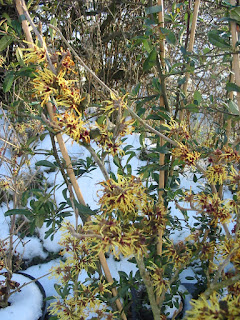 And this is the wrapping from Lidl Christmas chocolate going very cheap and all gone now. Sorry, Martha and Evie but you did get your share. 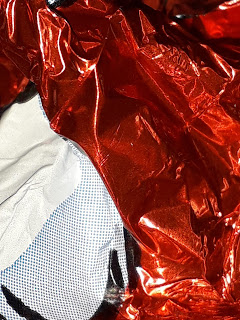 What fun. I told George about it and will let him play with his magnifier.

Yes, it is great fun even though it feels like cheating at photography.