So. We bought this Ikea kitchen on Wednesday and it was delivered on Thursday. Which was great. Everything worked out really well, the design team at Ikea were really good and the entire experience right down to the guys who delivered it was the very best. The delivery fellows even threw balls for our dogs and were sweet beyond the call of duty. 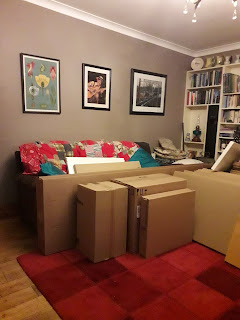 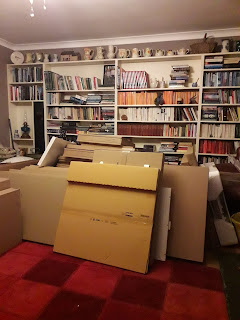 A little bit of kitchen

So. Bert started to build the big pantry cupboards today and he noticed that there were no suspension rails so we looked again and then Peter and Heather turned up and they looked again but no suspension rails and Bert reckoned there was no sink and no worktops. So I did a complete ticking off a checklist (with Heather's help) and it took an hour and there were ten packages missing to the value of almost a grand. While I did this Bert (with Peter and Heather's help) built most of the biggest cupboard and I phoned Ikea. The call centre was somewhere in London and me and the Ikea rep both had accents but we were very patient with each other and she took all the details and said there would have to be An Investigation. I did not like the sound of that.

After the phone call, I upset myself by going on to various online forums where people were complaining about poor treatment from Ikea in places like Philadelphia and Ilford, Essex and I was beginning to think that we had made a huge mistake shopping in Ikea. Then the phone rang and it was the delivery people saying that the missing items would be with us in half an hour.

What had happened was that one of the trolleys from the warehouse had not been loaded and that when this was noticed the delivery firm had been informed and we were supposed to get a phone call but that hadn't happened.

Sighs of relief all round.

In other news, I bought some euros for my trip to Amsterdam and am very excited. I'm going with Hannah and we're meeting Mel. Bert is not going. He will be minding dogs and cats, chickens and pigs and building an Ikea kitchen.
Posted by Nelly at 10:43 pm

Can't wait for the pictures of your IKEA kitchen.
I've gotten lots of IKEA furniture etc over the years and never had a problem with any of them. And so simple that even a blonde can put them together.

They'll be coming up Brig but, in the meantime, I'm popping over to Amsterdam for a few days. It will give Bert peace to get on with the job.

I have a friend who is a professional carpenter and he uses a lot of Ikea kitchens in his work, so I think you should be good.