I am trying to remember what troubled me about world affairs before Brexit.

The Cuban missile crisis was a bummer. I was in primary school at the time yet, despite my extreme youth, was deeply affected by it. It must have been all those terrified grownups that unnerved me.

Then there was the assassination of John F. Kennedy. And Robert Kennedy. And Martin Luther King Jr. Those were a tough few years. I was starting to understand that despite the sixties call for peace and love the world could be a hateful place. I didn't know the half of it.

Next along - The Troubles. That was a long, drawn-out nightmare. And the thing is, most of the time life went on as usual. Ordinary things kept happening while extraordinary events became the new normal. Loyalist strikes, tit-for-tat killings, the crump of car bombs on a summer evening, terrible atrocities thought about for a while then forgotten when the next one happened along. Sometimes I tuned out, to the extent that even decades later, I'd read about some horror and realise that I didn't remember anything about it.

Outside Ireland, there was the Cold War which I didn't understand except that there was always the threat of nuclear war. Then there was (not in order) the Falklands War, the Gulf Wars, famines in Ethiopia, Bangladesh and Sudan, Greenham Common, global warming and Aids.

Then came a time that things looked brighter. The Good Friday Agreement brought some sort of peace and normality to Northern Ireland and it seemed we could hope for better times. Of course, wars, atrocities and injustices continued elsewhere but they could be kept at a safe distance.

Until Omagh plunged Northern Ireland right back into the nightmare. For months afterwards, I could recite the name of every single victim.

Where's the hope in all this? I started writing this blog to remember other world events that worried and tormented me before Brexit. I was looking for a sense of proportion and instead, saddened myself even more. It all seems a bit hopeless at the moment.

Tomorrow, if I am not too consumed with fatigue, I should write about The Sunflower Field, a positive and helpful endeavour in a sad and sorry world. 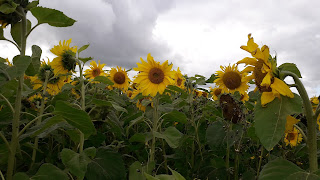 It really wasn't a happy, free time at all. I am looking forward to the Sunflower fields.

Mage, thank you. I made sure to write about the sunflowers. For you.