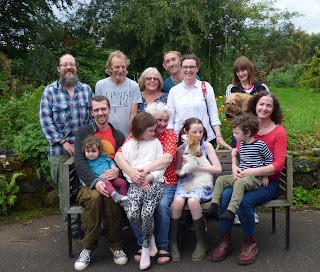 This has been a family-orientated week. On Monday, I prepared for the visit of the Norfolk Crowd by making an enormous cauldron of Bolognese sauce. Apparently, my only grandson likes to eat it with pasta at least five times a week. My plan was to serve it to the Haribo Contingent later that evening. I did and they seemed to enjoy it. I mentioned to Zoe that it was to be given to the Norfolk Lot in lasagna form on Tuesday and she couldn't help but wonder how I planned to serve it to the Norfolkians on Wednesday.  Cheeky monkey!

Zoe collected the Norfolk People on Tuesday morning and it was a delight to see how excited young James was. He remembered all the dogs' names and was chuffed that Judy jumped into the car to greet him before he had disentangled himself from the child seat. All the adults enjoyed the lasagna.

Wednesday was an At Home day. We had cheese and onion pie for dinner which was served late due to Young Norfolkians being completely out of their routine and unable to settle.

On Thursday the whole crowd of them left for a trip to Belfast. I have not yet mentioned that the Norfolkian grands were also part of the party. They are actually from Leek. Staffordshire but that's another story, one that may never be told. We had Indian food from the Khayber in Galgorm and, yet again, Miss Emily refused to settle. Rather than delay dinner to a ridiculously late hour the little madam was permitted to join us and sat at the table munching poppadoms and looking gleeful. Speaking as a granny, I was delighted with her, but her mother rather less so.

Friday was party day. The bouncy castle had been delivered the previous evening and all I had to do was clear the kitchen so that we could totally mess it up again. The party was a great success. Thirteen children, aged from 9 weeks to 9 years, nine parents, four grandparents and a much-loved aunt. Dave barbecued for everyone and the kids played on the bouncy castle, trampolined, chilled in the tree-house, explored the woods, utilised the toy-room*, visited the hens and pigs and had rides on the ninky-nonk**. 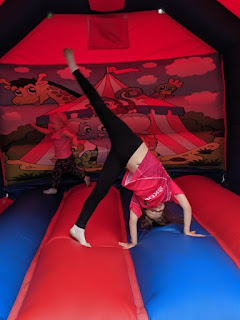 There was cake, lots of cake.

And on Saturday, Katy, Mark, James and Emily went home. But not before another session on the bouncy castle.  I'm already planning the next party. Who needs to have a birthday to have cake and bouncy castles? Not us.

Yet family isn't just about the fun times. Although, hopefully, we'll all have lots of those. Today my younger brother took me to visit his son's family. Joe's little granddaughter is gravely ill, and her parents doing the most amazing job of looking after her. Their courage, and that little girl's  spirit would humble anyone. And they've had fun, they've had adventures too in this last year of their daughter's illness.

Last word - let's cherish all the people we love. Even when we're not related to them.

* My private, secret sitting room, given over for one week only to trains and train tracks, Lego, farm animals, blocks, and many other toys.

** A metal trolley usually employed for moving plant trays. Holds four children comfortably, five being a bit of a squeeze,
Posted by Nelly at 11:59 pm

I so love all this. The secret room as well as the metal trolley. We have a wooden one....very solid but it only held two kids.

So many kids around here we need to go big!